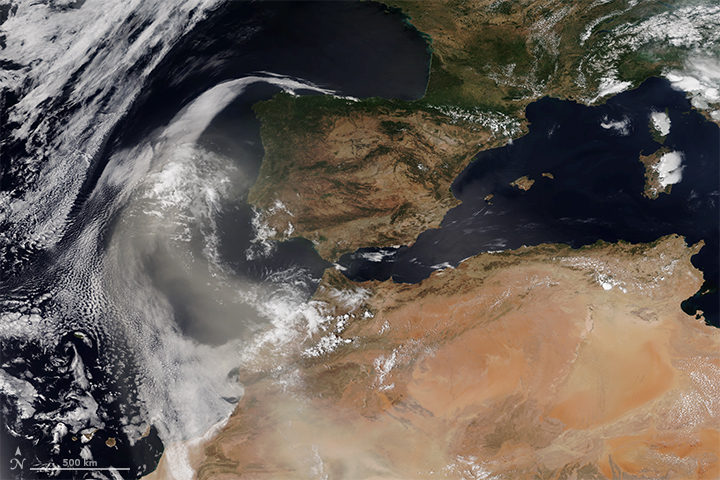 During the summertime, dust is commonly lofted into the air from northwest Africa, sometimes traveling to neighboring continents. This image shows a dust storm coming from the Moroccan coast and traveling north towards Europe. The image was acquired by the Visible Infrared Imager Radiometer Suite (VIIRS) on the Suomi NPP satellite on August 2, 2018.

Data from NASA's Global Modeling and Assimilation Office shows the dust storm was created when a high pressure system (clockwise winds) moved over Algeria and then Morocco on July 31, kicking up dust from the Saharan desert. The system continued to travel over the Atlantic Ocean and towards Spain and Portugal, bringing more dust along for the ride. The Moderate Resolution Imaging Spectroradiometer (MODIS) on NASA's Terra satellite shows the dust reached Spain and Portugal on August 3.

The hazier clouds over the Atlantic Ocean indicate areas where the dust rose above the clouds. NASA's Cloud-Aerosol Lidar and Infrared Pathfinder Satellite Observation (CALIPSO) data shows the majority of the dust was lofted 2 to 4 kilometers above the surface. (The low-lying clouds were hovering less than one kilometer from the surface.) 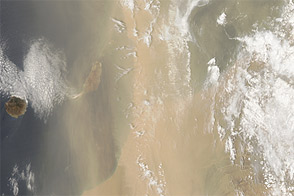 Acquired June 24, 2012, this natural-color image shows dust off the coast of Morocco.