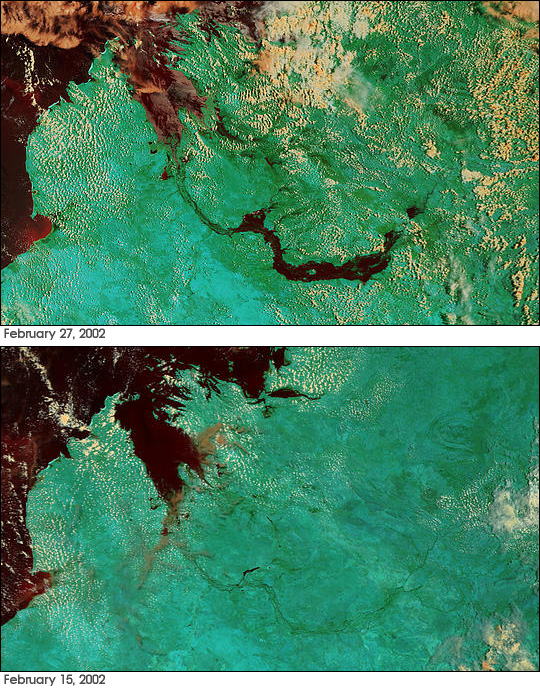 Heavy rains in northwestern Australia earlier this week caused flooding all along the Fitzroy River and forced dozens of aboriginal people from their homes. The false-color image of the flood (top) was acquired on February 27, 2002, by the Moderate-resolution Imaging Spectroradiometer (MODIS), flying aboard NASA’s Terra spacecraft.

Roughly 300 mm of rain came down in the region pictured in the image over the end of last week and this past weekend. The water swept over the normally dry landscape and mostly drained into the Fitzroy River, which forms a swollen black crescent in the middle of the top image. During the dry season the river resembles a thin black line (bottom image, acquired on Feb. 15, 2002. Additional flooding can be seen just north of the river, in the top image, and around King Sound, which is the bay that the river runs into.

In these false-color images, green shows land surface and black is water. The pinkish-white patches are clouds. To obtain a high-resolution image of the bottom scene, or to obtain true-color images, visit the MODIS Rapid Response Image Gallery.

Heavy rains in northwestern Australia early in the week of Feb. 24, 2002, caused flooding all along the Fitzroy River.