Tendrils of Sediment in the Caspian Sea 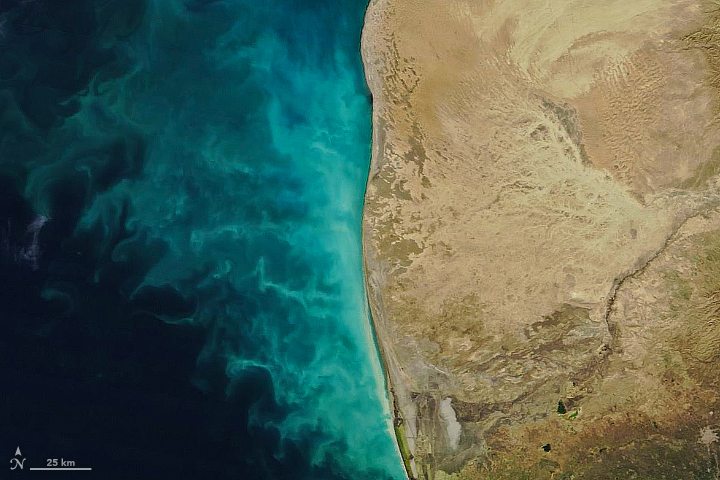 Many aspects of the Caspian Sea are in flux: water levels rise and fall over the decades, while ice cover and algae blooms come and go on seasonal timeframes. But along the sea’s southeastern side, off the coast of Turkmenistan, one feature shows up year-round in almost every cloud-free satellite image. The Caspian is marked by colorful swirls of perpetually turbid seawater.

On January 9, 2018, the Moderate Resolution Imaging Spectroradiometer (MODIS) on NASA’s Terra satellite acquired this image of coastal Turkmenistan. (Part of Iran is visible at the bottom of the image.) Surface winds help mix the water and stir up bottom sediments that impart a milky color.

The area of the sediment plume almost exactly mirrors an area of so-called “marine shallows.” Stretching 200 kilometers north to south and up to 120 kilometers west from the shore, this shallow-bottomed part of the sea reaches no more than 30 meters depth. Beyond the shelf, the seafloor drops steeply to depths of 100 meters and more.

Scientists have shown that the surface sediment plume is so consistent because no matter which way the winds blow—offshore or onshore—they stir up sediment in this shallow area. They found, however, that the turbidity is about twice as high when winds blow offshore.

Other shallow areas of the Caspian, notably the Turkmenbashi and Kara-Bogaz-Gol bays (north of this image), are also easily stirred up and produce sediment plumes visible from space. Such sediment has the potential to disrupt fisheries, which is one reason why experts have been keen to monitor the plumes and understand when and why they form.

Satellite data are key for the long-term monitoring of the Caspian. The lake stretches about 1,000 kilometers (600 miles) from Kazakhstan to Iran, across which there is tremendous variability. Satellites measure turbidity levels across the lake, while also collecting data on salinity, temperature, water levels, and oil pollution.

The southeast Caspian is marked by colorful swirls of perpetually turbid seawater.