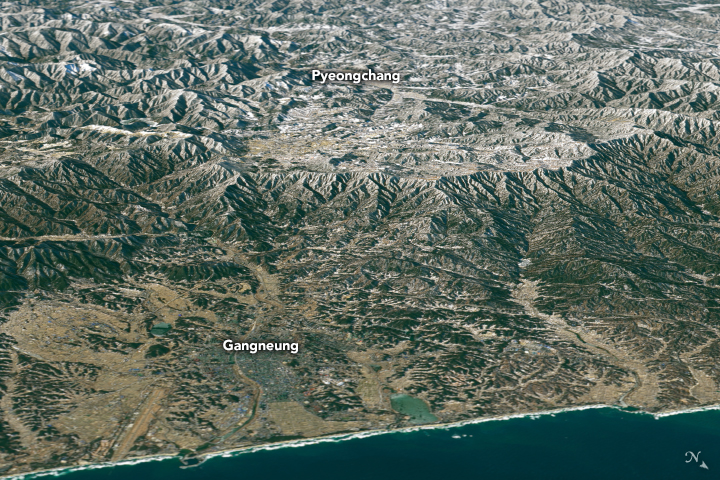 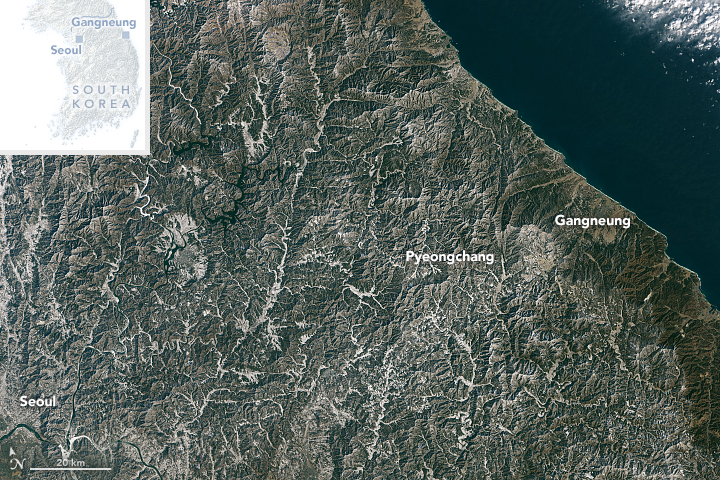 Since the Winter Olympics were first held in 1924, they only have been hosted twice in Asia, both times in Japan. This year the games will find a new home in South Korea, in the northeastern cities of Pyeongchang and Gangneung.

Meteorologists are predicting bitterly cold temperatures for these 23rd Winter Olympics—a stark contrast from the slushy and unseasonably warm games in Vancouver (2010) and Sochi (2014). In fact, the 2018 Olympics could be the coldest in the history of the games, as frigid westerlies tend to blow in from Siberia. The long-term average low for February in Pyeongchang is -10.5 degrees Celsius (13.1 degrees Fahrenheit), while the average high is -0.4°C (31.3°F). Recent weather has been significantly colder, and some meteorologists are speculating that temperatures for the opening ceremonies on February 9 could drop to -20°C. The Korea Meteorological Administration (KMA) forecast can be found here.

Pyeongchang is nestled in the Taebaek Mountains, a 22-million year old range that runs 500 kilometers (300 miles) near the Pacific Coast of South and North Korea. All of the skiing and snowboarding events, as well as the opening ceremonies, will be held in this area, which has a base elevation of about 700 meters (2,300 feet). Pyeongchang lies approximately 180 km (110 mile) east of Seoul, the capital of South Korea.

Olympic ice events—hockey, speed skating, curling, figure skating—will be held in Gangneung, which sits on the coastal plain between the Taebaek Mountains and the Pacific Ocean.

Both cities are visible in these natural-color images acquired on January 26, 2018, by the Operational Land Imager (OLI) on Landsat 8. The top image shows the Landsat data draped over topographic data from NASA’s Shuttle Radar Topography Mission (SRTM). The second image is a nadir (straight down) view from OLI.

The development of Olympic venues at Mount Gariwang—particularly the Alpensia and Yongpyong ski resorts—came with some cost and controversy. Tree-covered slopes were cleared for ski runs and other infrastructure, though Olympic organizers have promised to re-plant much of the area after the games are completed. Environmental and cultural advocates lamented the loss of ancient and sacred forests, but Olympic organizers pointed to a rule that Alpine ski events must be held on slopes that stand at least 800 meters above sea level, and Mount Gariwang was identified as the only site that could meet that requirement.

Alongside the competition and spectacle of the games, Earth science researchers will be conducting observations and experiments. International Collaborative Experiments for Pyeongchang 2018 Olympic and Paralympic Winter Games (ICE-POP 2018) is a scientific field campaign that will be taking place in Korea in February and March to study mountain-induced snowfall and other weather phenomena in the PyeongChang region. The effort is led by KMA in conjunction with the World Meteorological Organization, and NASA-funded scientists will be participating. 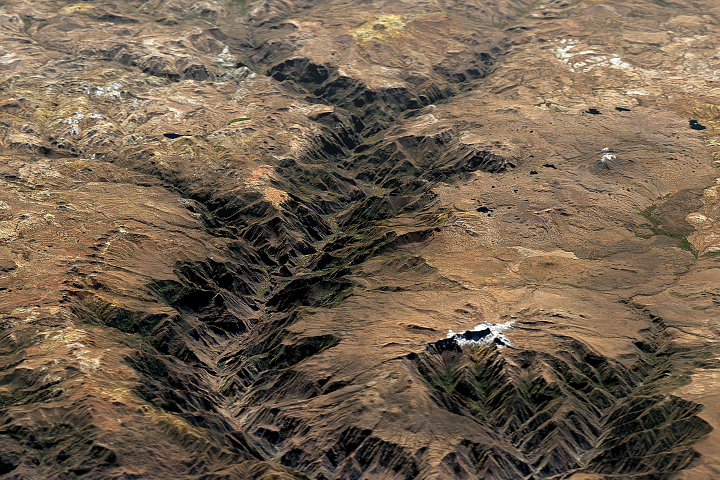 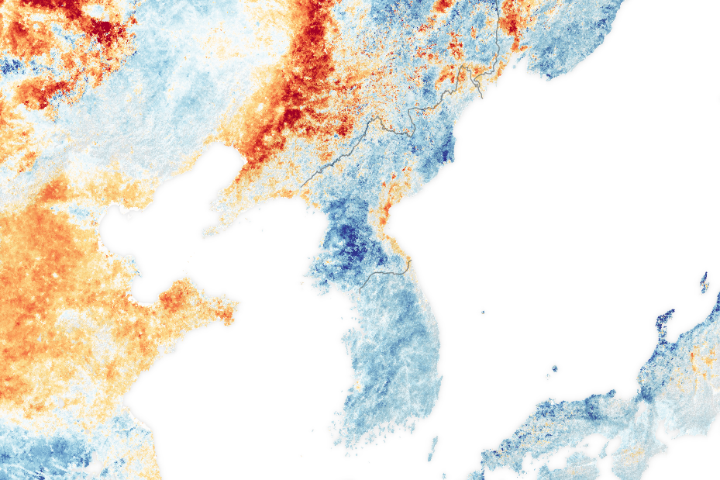 A Cold Greeting in Pyeongchang

The temperatures in the first days of the winter games have been colder than usual.