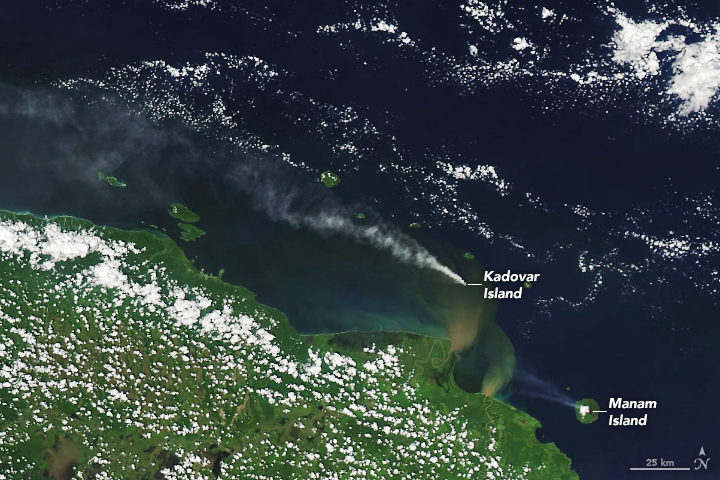 On January 5, 2018, Kadovar volcano in Papua New Guinea erupted for the first-known time in recorded history. The Moderate Resolution Imaging Spectroradiometer (MODIS) on NASA’s Aqua satellite captured this image of the eruption a few days later, on January 7, 2018, as a plume of ash and steam continued to stream from its crater.

Hundreds of people living on the flanks of Kadovar evacuated to nearby islands, according to news reports. But as the eruption and tsunami risk grew, the evacuees had to relocate again (along with thousands more) from Bam and Blup Blup islands to the mainland.

Another plume visible southeast of Kadovar rises from the island of Manam—one of Papua New Guinea’s most active volcanos. Ongoing activity on Manam is reportedly unrelated to activity on Kadovar.

Meanwhile, plumes near the coast of the mainland stem from a non-volcanic source. These plumes, which color the water brown-green, are caused by sediment from the Sepik and Ramu rivers.