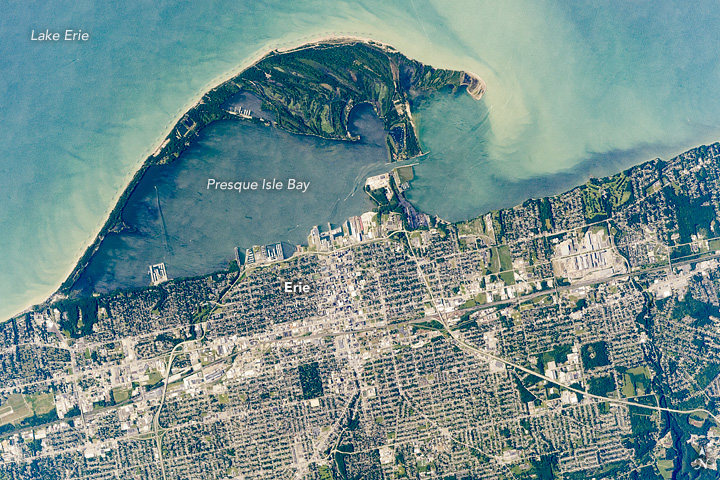 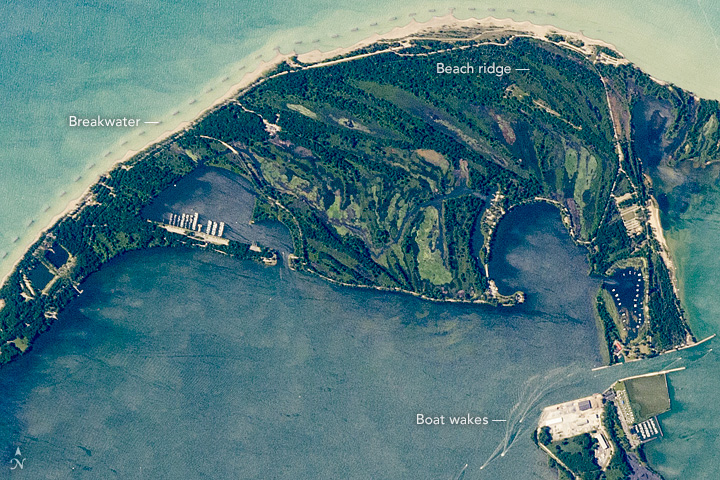 An astronaut aboard the International Space Station focused a long-lens camera on the southern coastline of Lake Erie. The curved peninsula of Presque Isle State Park juts into the Great Lake, while the city in the lower part of the image is the deep-water port of Erie, Pennsylvania. Several V-shaped wakes show boat traffic around the port.

The lake water just offshore tends to be light-toned because significant river and beach sediment is regularly moved eastward by the action of wind and waves. The detailed image shows the swells made by these winds.

Sediment has piled up to build this sand spit over thousands of years. Now covered with vegetation, Presque Isle State Park includes dozens of beach ridges—with each line representing a coastline from the past. The formation of the peninsula also has enclosed Presque Isle Bay, the site of modern port facilities.

Because the sediment is constantly moved along the shore by waves, the exposed beach facing the lake has been protected from erosion. To do this, many short breakwaters (barriers) have been built just offshore for nearly the entire length of the beach.

Astronaut photograph ISS052-E-6364 was acquired on June 21, 2017, with a Nikon D4 digital camera using an 1150 millimeter lens, and is provided by the ISS Crew Earth Observations Facility and the Earth Science and Remote Sensing Unit, Johnson Space Center. The image was taken by a member of the Expedition 52 crew. The image has been cropped and enhanced to improve contrast, and lens artifacts have been removed. The International Space Station Program supports the laboratory as part of the ISS National Lab to help astronauts take pictures of Earth that will be of the greatest value to scientists and the public, and to make those images freely available on the Internet. Additional images taken by astronauts and cosmonauts can be viewed at the NASA/JSC Gateway to Astronaut Photography of Earth. Caption by Justin Wilkinson, Texas State University, JETS Contract at NASA-JSC.

Presque Isle State Park includes dozens of individual beach ridges, with each line representing a coastline from the past.