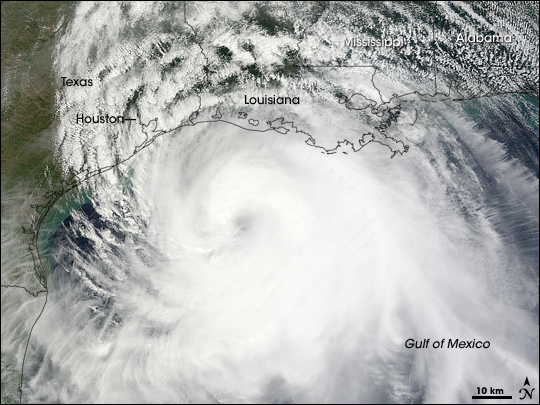 Hurricane Ike was a strong Category 2 storm when the Moderate Resolution Imaging Spectroradiometer (MODIS) on NASA’s Terra satellite captured this image at 12:05 p.m. CDT on September 12, 2008. The massive storm was already starting to pound the Texas and Louisiana coast with high winds and battering waves, even though the eye of the storm remained well off shore. The National Hurricane Center forecast that the storm’s center would come ashore immediately west of Houston late on September 12 or early September 13.

Ike had sustained winds of 165 kilometer per hour (105 miles per hour) with stronger gusts about the time this image was taken. The National Hurricane Center warned that the storm could intensify into a Category 3 storm before making landfall. Despite the strong winds, the real danger associated with Ike was coastal flooding and large, damaging waves. Ike could push water 20 to 25 feet above normal high-tide levels, burying coastal regions by more than nine feet of water as much as a mile inland, warned the National Weather Service.

The surge was expected to extend over a wider distance than usual because of Ike’s tremendous size, said the National Hurricane Center. Hurricane-force winds extended 195 kilometers (120 miles) from the center of the storm when MODIS acquired this image.

For the most up-to-date information and warnings, please check with your local office of the National Weather Service.

Ike had sustained winds of 165 kilometer per hour (105 miles per hour) with stronger gusts about the time this image was taken. Despite the strong winds, the real danger associated with Ike was coastal flooding and large, damaging waves.