Washington on the Potomac River 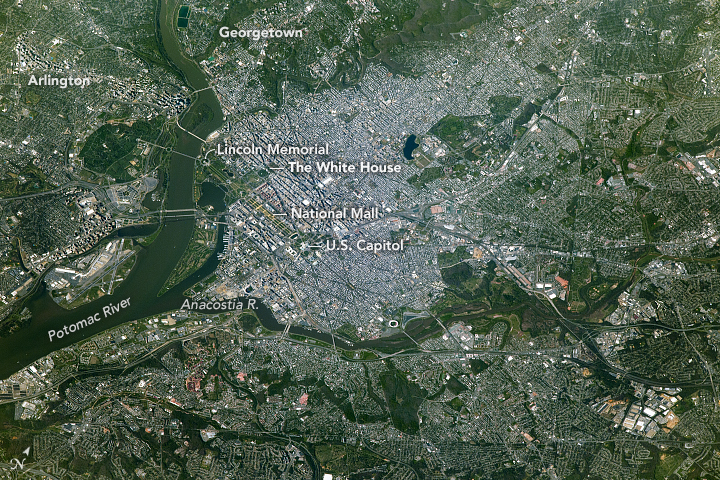 An astronaut aboard the International Space Station took this photograph (5-meter spatial resolution) of Washington, the capital of the United States of America. Here the Potomac River flows south toward Chesapeake Bay and forms the geographic boundary between Virginia and Washington (as well as Maryland), while the Anacostia River links to the Potomac on the eastern side of the city.

Wedged between Maryland and Virginia, the District of Columbia was established in 1790 to serve as the permanent seat of the U.S. federal government. Originally the territory was relinquished by Virginia and Maryland as a 100-square-mile plot on both sides of the Potomac River. At the time, Georgetown, Maryland, and Alexandria, Virginia (just out of the scene to the lower left), were successful ports located on the eastern and western sides of the river. Georgetown remains as an historic neighborhood of Washington, D.C. In 1846, Virginia gained back the land contributed to the District of Columbia as a result of neglect of the area by Congress (known as retrocession). Those areas eventually became the cities of Arlington and Alexandria. There are 40 boundary stones that mark the original District boundary and stand as the oldest federal monument in the country.

The past 200 years have painted Washington rich with social and political history. Hundreds of monuments and sculptures are peppered throughout the city to honor the nation’s founders, its presidents, its military and cultural heroes, and other men and women who have shaped the nation. Among the most popular places are the Lincoln Memorial, the National Mall, the White House, and the United States Capitol.

According to the US Census Bureau, more than 681,000 people reside in Washington. Commuters from Virginia and Maryland swell the daytime, work-week population past one million.

Astronaut photograph ISS051-E-12656 was acquired on April 11, 2017, with a Nikon D4 digital camera using an 1150 millimeter lens, and is provided by the ISS Crew Earth Observations Facility and the Earth Science and Remote Sensing Unit, Johnson Space Center. The image was taken by a member of the Expedition 51 crew. The image has been cropped and enhanced to improve contrast, and lens artifacts have been removed. The International Space Station Program supports the laboratory as part of the ISS National Lab to help astronauts take pictures of Earth that will be of the greatest value to scientists and the public, and to make those images freely available on the Internet. Additional images taken by astronauts and cosmonauts can be viewed at the NASA/JSC Gateway to Astronaut Photography of Earth. Caption by Andi Hollier, Hx5, JETS Contract at NASA-JSC.

Wedged between Maryland and Virginia, the District of Columbia was established in 1790 to serve as the permanent seat of the U.S. federal government.

Growth in Washington, District of Columbia

A Capital Covered in Snow

A severe winter storm coated the Mid-Atlantic of the United States with a thick blanket of snow.

The colors may not look as brilliant as the reds and golds you would see on the ground, but even from space, the difference between the summer and fall attire of the U.S. Mid-Atlantic is dramatic.