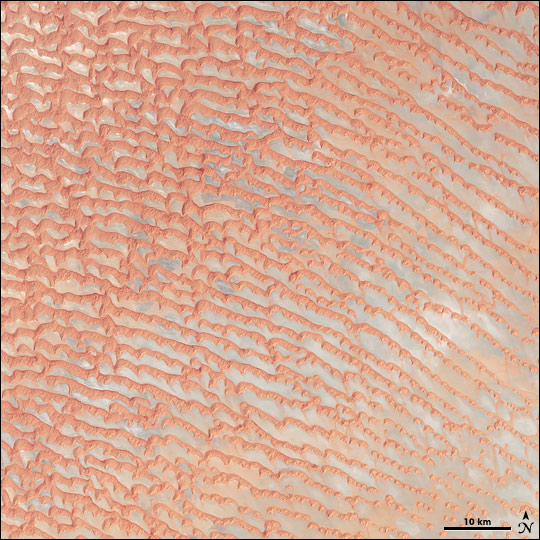 The Arabian Peninsula’s Empty Quarter, known as Rub’ al Khali, is the world’s largest sand sea, holding about half as much sand as the Sahara Desert. The Empty Quarter covers 583,000 square kilometers (225,000 square miles), and stretches over parts of Saudi Arabia, Yemen, Oman, and the United Arab Emirates. The Enhanced Thematic Mapper on NASA’s Landsat 7 satellite captured this image of the Empty Quarter on August 26, 2001.

The area shown resides in southeastern Saudi Arabia, midway between the United Arab Emirates to the north and Oman in the south. Parallel rows of salmon-pink and white alternate to create a rippling pattern. White salt flats, known as sebkhas or sabkhas, separate the dunes. These salt-encrusted plains vary in hardness, in some places creating a surface strong enough to drive a vehicle over, in other places disappearing into sand. The sand dunes soar above the salt plains between them. 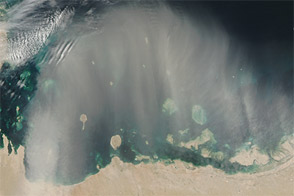 Acquired March 6, 2013, this image shows a dust storm blowing over the Persian Gulf.