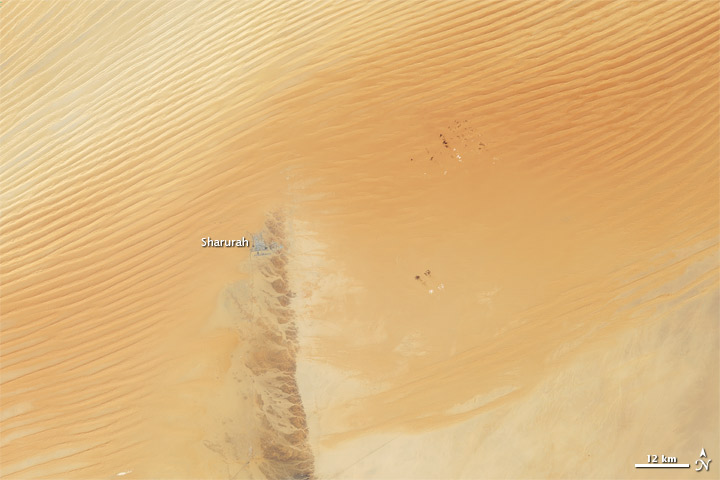 Sprawling over parts of Saudi Arabia, Yemen, Oman, and the United Arab Emirates, the Empty Quarter—or Rub’ al Khali—is the world’s largest sand sea. Roughly the size of France, the Empty Quarter holds about half as much sand as the entire Sahara Desert.

On February 1, 2003, the Enhanced Thematic Mapper Plus on the Landsat 7 satellite captured this natural-color image of the Empty Quarter near its southern margin, just north of the Saudi Arabia-Yemen border. Linear dunes run roughly northeast-southwest for many kilometers in this region, sculpted by prevailing winds. But in this image, a slight rise of rocky land—including the border town and airport of Sharurah (Sharorah)—interrupts them. East of Sharurah, small clouds float overhead, casting shadows to the northwest.

Geologists have offered multiple explanations for how so much sand accumulated in this region, and it’s possible that sands in different parts of the Empty Quarter arose from different sources. Sea levels have risen and fallen many times over the course of the Earth’s history, and fluctuating water levels in the Persian Gulf have periodically exposed sand grains that could be carried by winds to the peninsula.

However, the reddish sands in the southern part of the Empty Quarter (as in this image), may have traveled through wadis—streams that flow during the rainy season. Carried into the low-lying basin from surrounding higher ground, the sand grains acquired their red hue from iron oxides.

Although the region includes a few towns, not many people live in the Empty Quarter because of the intense heat and scarce water. Sand dunes themselves present challenges, impeding the movement of people and vehicles. Much of the land in this region actually lies at an elevation below sea level, but near the Yemen border, dunes can reach an altitude of 1,200 meters (3,900 feet) above sea level. 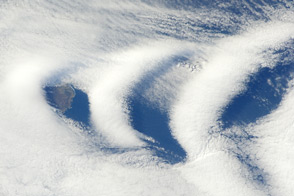 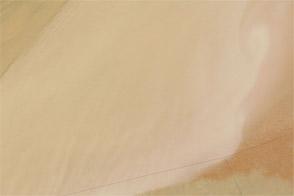 A dust plume spans hundreds of kilometers over the Arabian Peninsula in this natural-color image from late February 2012.