Lines of Foam on Garabogazköl 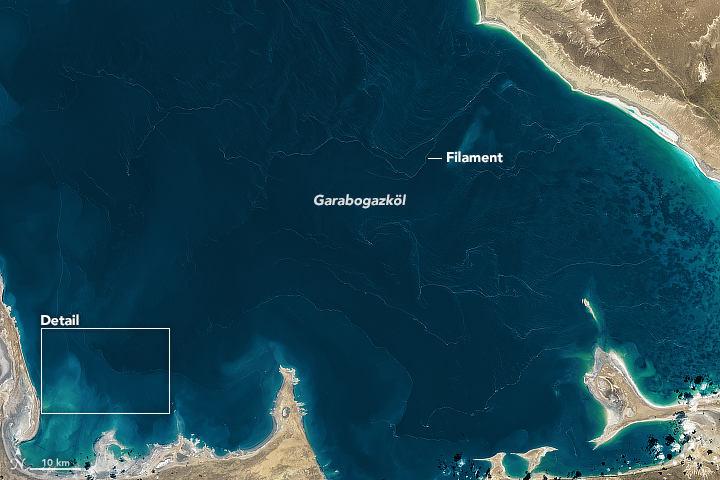 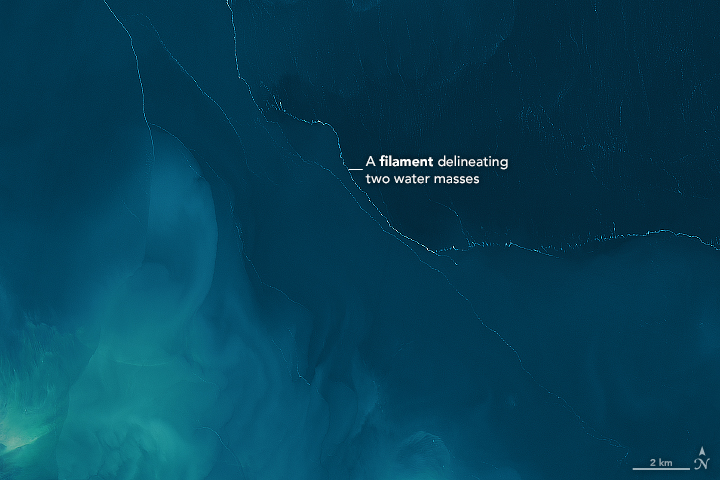 The next time you are out on the water in a boat or surfboard, keep an eye out for long filaments of foam and debris floating at the surface. This common phenomenon—usually the product of natural decomposition processes and wind—can be quite eye-catching from the surface or from space. On April 4, 2017, the Operational Land Imager (OLI) on Landsat 8 captured this image of foamy streaks on Garabogazköl, a shallow, salty lagoon near the Caspian Sea in Turkmenistan.

In most cases, foam is the product of decaying bits of aquatic plants, algae, phytoplankton, or other microorganisms. The decomposition process releases oils and other substances called surfactants that rise up and reduce the surface tension of the water—making it easier for bubbles to form in windy conditions. (In addition to these natural sources, detergents and other manmade pollutants can act as surfactants.)

In the case of Garabogazköl, determining the composition or source of the foam from satellite imagery alone is impossible, but it is possible to make some educated guesses about its origins. While Garabogazköl’s water is so salty that few plants or other organisms can survive in it, certain types of salt-loving phytoplankton, bacteria, and microorganisms likely can, explained Jesús Pineda of Woods Hole Oceanographic Institution. “Generally, organic material causes foam, but the relationship between abundance of organic material and foam is not straightforward,” he said. “For example, on occasion, huge amounts of seaweed strand on beaches in the Mexican Caribbean, yet you see almost no foam.”

The white lines winding throughout the image offer some hints about the water masses beneath them. The lines are likely the intersections of warmer and cooler waters. When two surface currents bump into each other, they dive. “This is what is happening along each of these lines. Waters meet up, have nowhere to go, then get pushed downward,” explained Kim Martini, an oceanographer at Sea-Bird Scientific in an article for Deep Sea News.

How do those masses of water get different temperatures in the first place? “If I had to speculate, I would say these fronts are caused by more heating in the shallow shores of the lake,” said Pineda. “In other words, the Sun is probably heating small volumes of water near the shoreline more than it does in deeper parts in the center of the lake. If this was happening, it would make sense that the surface lines would be roughly parallel to the shoreline, just as you see here.”