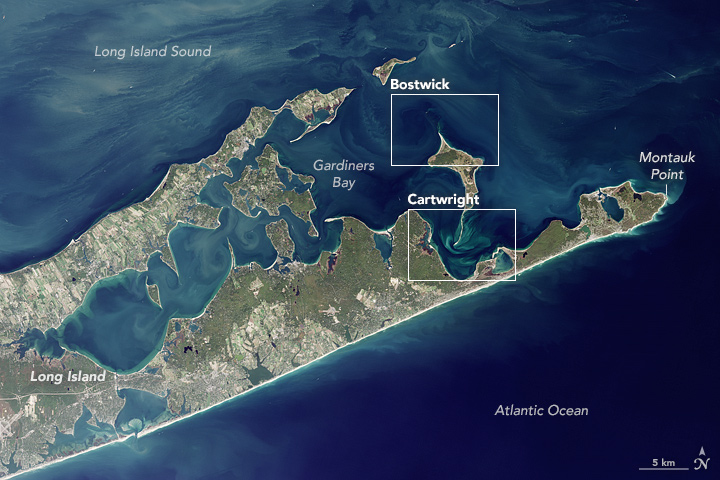 The story of Long Island began with ice. As glaciers retreated at the end of the last Ice Age, they dropped and piled up hills of sediment. When the ice melted and seas rose, those piles of glacial debris were surrounded by the sea. Stretching out into the Atlantic like a giant fish, the island continues to change. Thousands of years later, water still re-sculpts the island’s shoreline.

On October 17, 2016, the Operational Land Imager (OLI) on Landsat 8 captured this image of Long Island’s East End. While the North Shore is characterized by craggy inlets and peninsulas, the South Shore is lined with smooth, protective sand bars—the result of constantly pounding waves.

Between the branching tails of the East End lies Gardiners Island, which spans more than 3,300 acres and is closed to the public—a source of curiosity given its proximity to population-dense Long Island. In the 1600s, Gardiners was believed to have a cache of pirate gold. Modern scientists appreciate it for another form of booty: its rich coastal geology. 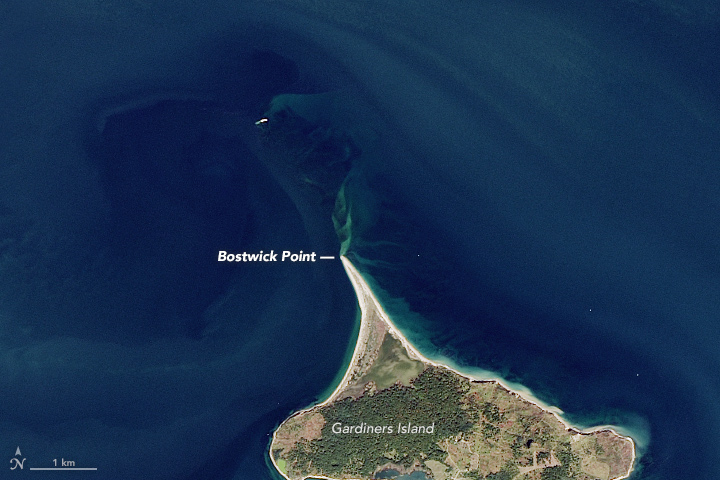 On the northern end of Gardiners Island (above), a fang-like feature juts into the water. This cuspate foreland at Bostwick Point owes its shape to the waves. As they hit the shore, waves agitate sediment along the coast. When they break at an angle to the coast, this creates a current parallel to the coastline called a “longshore current.” Combined, these processes can rake sand and sediment into this triangular feature.

The opposite end of the island (below) includes a long, finger-shaped sand bank called a spit. These sand features frequently form at the mouths of inlets and in places where water must move around coastal barriers and other features. The spit projecting from the island’s southern end has grown by nearly a mile (1.6 kilometers) over the past few decades. In the process, the ocean has breached its length at several points, creating smaller islets like Cartwright Island.

Coastline breaches most often form during hurricanes, nor’easters, and other potent storms, said Andrew Ashton, a coastal geologist at the Woods Hole Oceanographic Institution. However, over time, the constant pounding of waves tends to smooth out spits, refilling the gaps between them. Strong currents tend to develop around such features.

In this image, the faint, light-colored streams of sediment in the water trace this movement. The spit acts like a funnel, forcing water to move through a narrower channel and resulting in more powerful currents. To get the same amount of water through the space, its flow must speed up, Ashton said. “This little spit coming off the island is trying to choke that water off.” 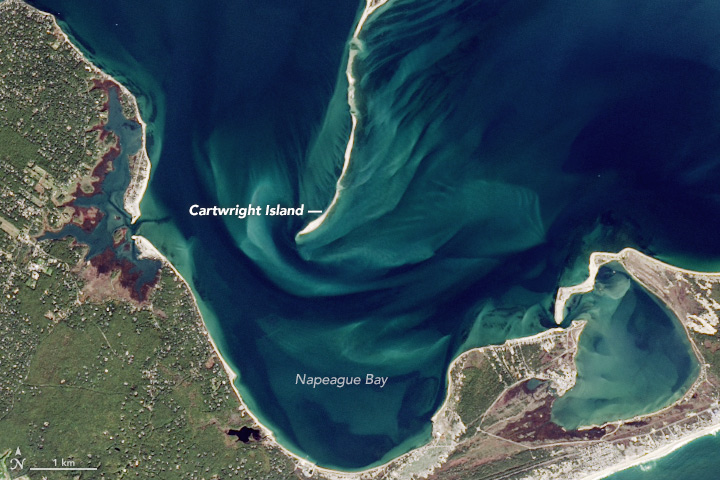