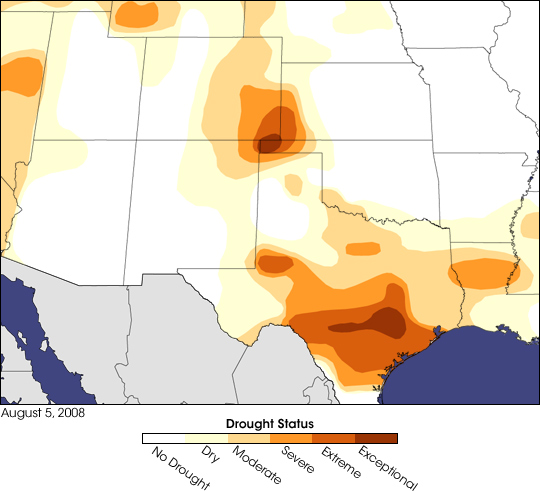 In late June 2008, after months of below-average rainfall, high temperatures, and desiccating winds, the Oklahoma Panhandle and parts of neighboring states, a region of the United States called the High Plains, slid into “exceptional” drought. The category is the most severe in the ranking scheme of the U.S. Drought Mitigation Center. According to staff climatologists at the Oklahoma Climatological Survey and reports from long-time residents, the conditions in the western Panhandle in summer 2008 were as dry or drier than conditions the area experienced during the Dust Bowl of the 1930s.

The map above shows drought in the United States in the week ending August 5, 2008. An animation of these maps spanning the past year shows the evolution of the High Plains drought since summer 2007. Conditions were near normal in late summer and fall 2007, but they deteriorated over the course of the winter and spring. According to Oklahoma Climatological Survey statistics, the 365-day period ending August 10, 2008, was the driest in the Panhandle since records began in 1921. Despite rainfall from Hurricane Dolly in late July, central and southern Texas were also suffering extreme to exceptional drought, conditions which had been building since Novemebr 2007.

To create the drought status maps, the National Drought Mitigation Center blends several indicators, including precipitation, stream flows, soil moisture, water levels in reservoirs, and satellite-based maps of vegetation health. The Drought Mitigation Center defines an “exceptional” drought as a “once in fifty years” occurrence. In western Oklahoma, crops, including feed for cattle, failed, and the grasses on the area’s rangelands were in such poor shape that many ranchers were forced to sell their entire herds.

The Earth Observatory feature story Devastating Drought Settles on the High Plains provides more information and imagery about the cause and consequences of the 2008 drought in the heart of Dust Bowl country.

Image and animation by Jesse Allen, based on Drought Monitor data provided by the National Drought Mitigation Center. Caption by Rebecca Lindsey.