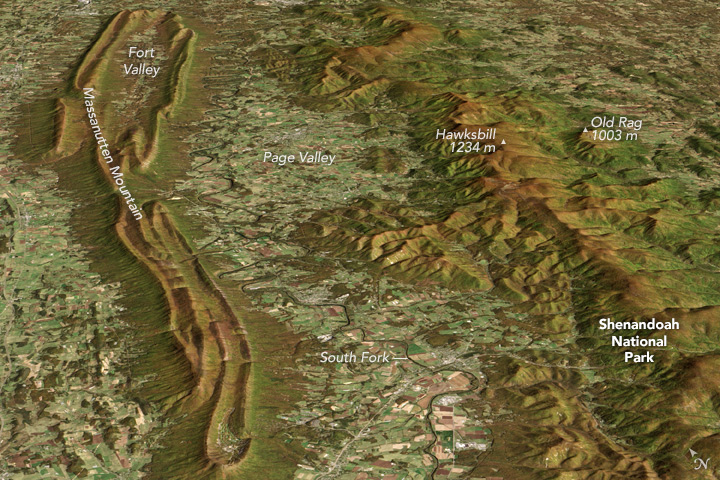 Along the western border of Virginia, two roughly parallel ridges—one of which is the backbone of Shenandoah National Park and the other part of George Washington National Forest—rise above the rolling lowlands of the Shenandoah Valley. Despite being just a few kilometers apart, the ridges show some marked differences.

With a perimeter of smooth, straight crests encircling a valley, Massanutten Mountain has the look of a flat-bottomed canoe. Shenandoah National Park’s portion of the Blue Ridge, in contrast, has a more textured, irregular, and knobby shape; it looks more like a spine, with a dendritic network of gullies descending from its main crest.

On October 21, 2013, the Operational Land Imager (OLI) on Landsat 8 captured this natural-color image of the neighboring ridges. The Landsat image has been draped over a digital elevation model based on data from the Advanced Spaceborne Thermal Emission and Reflection Radiometer (ASTER) on NASA’s Terra satellite. The tops of both ridges are brown because fall colors had emerged in these cool, high-elevation areas.

The two ridges look different due to distinct geological histories. The rock underneath Shenandoah National Park is largely igneous, meaning it was created when magma or lava cooled and solidified. Some of the oldest rocks in the park are granites that formed deep underground about 1.1 billion years ago when continents collided and pushed up a mountain range during the Grenville orogeny. Major outcrops of granite are located east of Shenandoah’s highest crest and dominate peaks such as Old Rag and Mary’s Rock.

About 500 million years later, the tectonic tides had shifted. Instead of continents colliding, they were pulling apart. As the crust thinned and rifts formed, volcanoes sprang up and spilled lava across the land surface. This laid down layer upon layer of basalt, a type of igneous rock that cools quickly and thus has small mineral crystals. When exposed later to the high temperatures and pressures associated with the collision of tectonic plates, the basalt metamorphosized into metabasalt. This greenish rock, known in this area as the Catoctin Formation, makes up much of the Blue Ridge’s highest crest, including peaks like Hawksbill, Stony Man, Mount Marshall, and Hightop.

As the rift widened, it eventually connected with the ocean and was filled by a narrow, shallow sea. At its bottom, sedimentary rocks began to form as layers of sand, mud, and material from sea life began to rain down on the sea floor and become sandstone, shale, and carbonate rock.

The landscape we see today was set up by one more cycle of continents slamming into each other—a collision between North America and Africa about 300 million years ago known as the Alleghanian orogeny. While building mountains that were once as tall as the Himalayas, the Alleghanian orogeny thrust the older igneous rocks (once the root of the Grenville range) upward and squeezed them into a curved bulge called an anticline, putting older rock layers quite close to the surface. The same collision squeezed and folded the nearby rocks of the Shenandoah Valley and Massanutten into a concave depression called a syncline that kept the youngest sedimentary rocks quite close to the surface.

With the rock layers in place, erosion played the final role in sculpting the modern landscape. Rivers such as the Shenandoah’s South Fork wore away relatively soft and weak types of sedimentary rock (the shale and carbonates) to create low-relief areas such as the Shenandoah Valley, Page Valley, and Fort Valley. Erosion-resistant, quartz-rich sandstone remained to give Massanutten Mountain its distinctive shape. To the east, the erosion-resistant igneous-based rocks of the Blue Ridge tower over Shenandoah Valley, Massanutten Mountain, and the rest of the Piedmont.