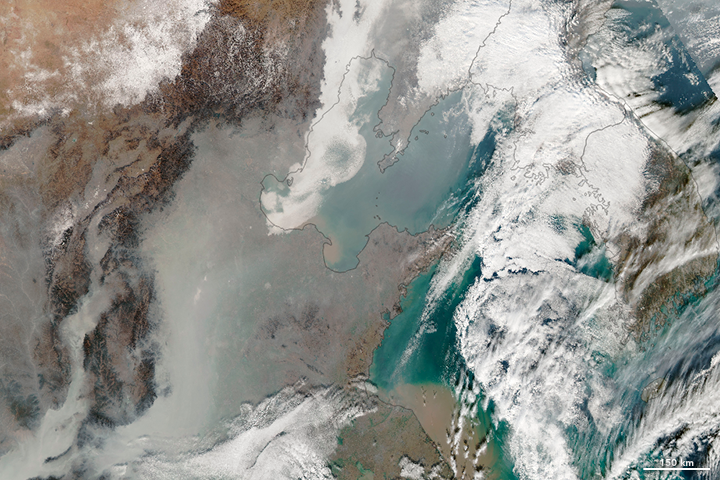 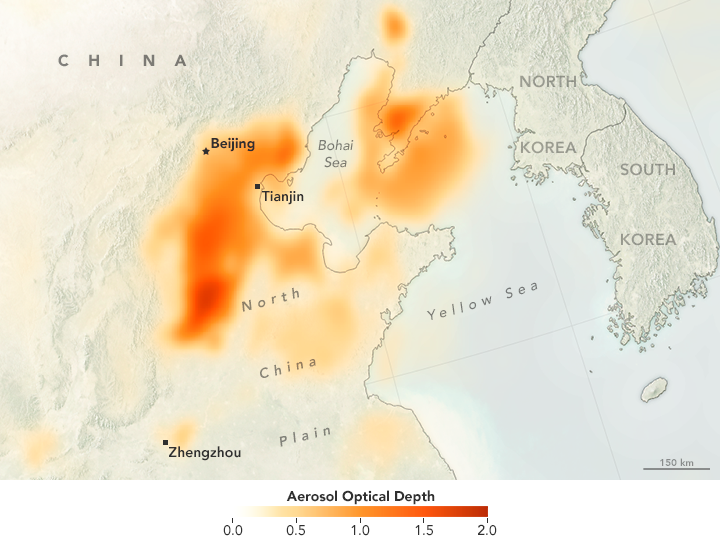 Officials issued pollution alerts for more than 40 cities in northern China in mid-December 2016. During its latest bout of intense smog—which led to red alerts in more than 20 cities—authorities shut down schools and airports and told citizens to stay indoors, according to news reports.

Smog was particularly bad in cities like Beijing, which declared a five-day pollution “red alert” on December 16. The Chinese capital reached dangerous levels of more than 400 micrograms per cubic meter. In Shijiazhuang, capital of the Hebei province, airborne pollutants surpassed World Health Organization (WHO) guidelines by 100 times on December 19. (A safe level is 10-25 micrograms per cubic meter of PM2.5, according to the WHO.)

Fine, airborne particulate matter (PM) that is smaller than 2.5 microns (about one thirtieth the width of a human hair) can cause lung damage. Industrial practices like fossil fuel burning and agricultural fires produce most PM2.5 aerosol particles. Despite efforts to curb these emissions, China continues to struggle with its air quality.

From space, the smog appears gray. The Moderate Resolution Imaging Spectroradiometer (MODIS) on NASA’s Aqua satellite captured a natural-color image (top) of northeastern China on December 22, 2016. Heavy, gray smog shrouds parts of the country, while the brightest, whiter areas are likely clouds or fog. The second image shows the severity of haze as measured by satellite, with deepest reds indicating the most affected areas. The map is based on MODIS measurements of aerosol optical depth—how much sunlight the aerosol particles prevent from reaching the ground.

While smog regularly occurs in China, the extent of this event stands out. In a record-breaking air pollution event in January 2013, ground-based sensors at the U.S. Embassy in Beijing reported PM2.5 measurements of 291 micrograms per cubic meter of air. The December 2016 smog is comparable to January 2013, said Andrew Sayer, an atmospheric scientist working for Universities Space Research Association at NASA’ Goddard Space Flight Center.

Low winter temperatures often cause dense, smog-laden air to be trapped low in the atmosphere. According to Sayer, there are some indications that such incidents have been happening more frequently in the past few decades, though the reason for the increase has yet to be determined. “People are trying to figure out whether it’s due to changing air patterns,” he said, “or whether there’s more stuff in the air that stagnates.”

Smog and Haze in Northeastern China

Thick haze filled the low valleys and plains in northeastern China in the winter of 2016-17. 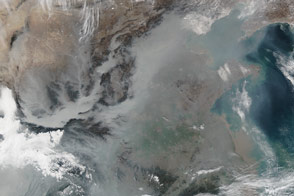