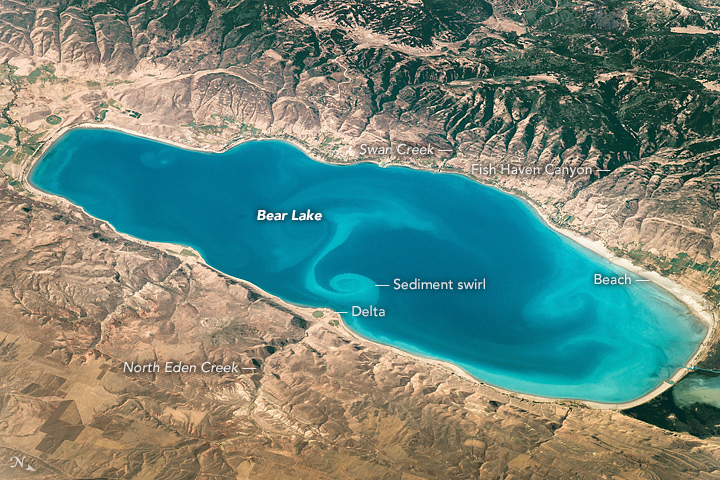 This bright blue lake, with its tight swirl of a light-toned sediment, caught the eye of an astronaut on the International Space Station. Situated on the Idaho-Utah border, Bear Lake is one of the bigger lakes in the Rocky Mountains.

The two swirls near the center of the 30 kilometer (19 mile) long lake are rotating in the deepest water—perhaps from outflow from Swan Creek or Fish Haven Creek. North Eden Creek has laid down a little delta at its mouth. Two center-pivot irrigation fields sit on the delta, one of the few flat places in this mountainous landscape.

The more diffuse swirls at the north end of the lake (lower right) likely formed from sediment entering from North Eden Creek. This sediment is carried north along the shoreline by lake currents, joining with sediment eroded from the white beaches.

When the north-end beach formed, it cut off of Bear Lake from the Mud Lake lagoon. Muddy sediments subsequently collected to form a dark-toned, vegetated wetland now protected as the Bear Lake National Wildlife Refuge. A much larger protected area is the Cache National Forest, visible across the entire top part of the image. Dramatic canyons like Fish Haven Canyon cut deeply into the Wasatch Mountains.

Astronaut photograph ISS048-E-73257 was acquired on September 6, 2016, with a Nikon D4 digital camera using a 600 millimeter lens, and is provided by the ISS Crew Earth Observations Facility and the Earth Science and Remote Sensing Unit, Johnson Space Center. The image was taken by a member of the Expedition 48 crew. The image has been cropped and enhanced to improve contrast, and lens artifacts have been removed. The International Space Station Program supports the laboratory as part of the ISS National Lab to help astronauts take pictures of Earth that will be of the greatest value to scientists and the public, and to make those images freely available on the Internet. Additional images taken by astronauts and cosmonauts can be viewed at the NASA/JSC Gateway to Astronaut Photography of Earth. Caption by M. Justin Wilkinson, Texas State University, Jacobs Contract at NASA-JSC.

Situated on the Idaho-Utah border, it is one of the bigger lakes in the Rocky Mountains.