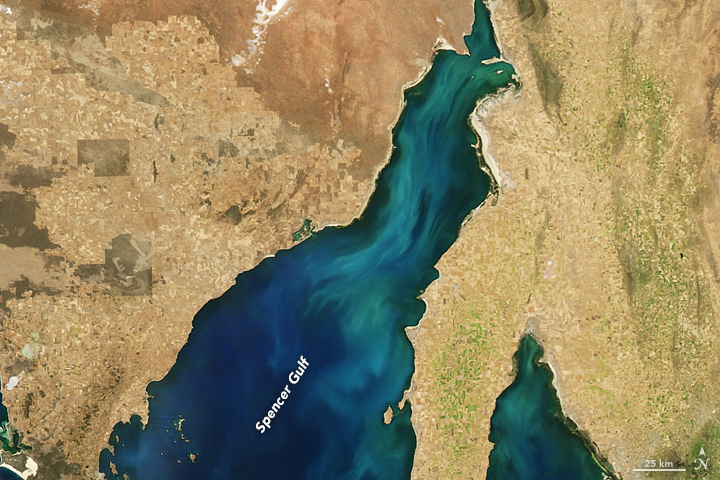 On November 16, 2016, the Moderate Resolution Imaging Spectroradiometer (MODIS) on NASA’s Aqua satellite captured this natural-color image of milky colored waters in Australia’s Spencer Gulf. At first glance, the swirling patterns appeared to be an algae bloom.

But after a closer look at the image, the geography, and the scientific literature, ocean scientists began to formulate a different diagnosis. For one thing, Spencer Gulf typically lacks nutrients that would support algae, making it an unlikely candidate for a large-scale algae bloom, said Ivona Cetinić, an oceanographer at NASA. “There’s no river inputs here; there’s nothing to feed algae blooms,” Cetinić said. Absent in situ testing, it is probable that “what you’re seeing is a very sediment-dominated system,” she said.

In contrast, coastal waters to the southeast of Adelaide experience seasonal upwelling, wherein nutrient-rich waters push higher in the water column and provide a banquet for algae, resulting in large blooms.

While Spencer Gulf occasionally gets small inputs of water from salt lakes north of Port Augusta, waters in the region remain extremely salty and less hospitable to algae, said Lachlan McKinna, also a NASA ocean scientist. “It’s an inverse estuary,” he said, pointing to salt lakes to the north that dry up and turn white under the baking sun. In this way, Spencer Gulf is the opposite of most estuaries, which become less saline as you head inland from the ocean. 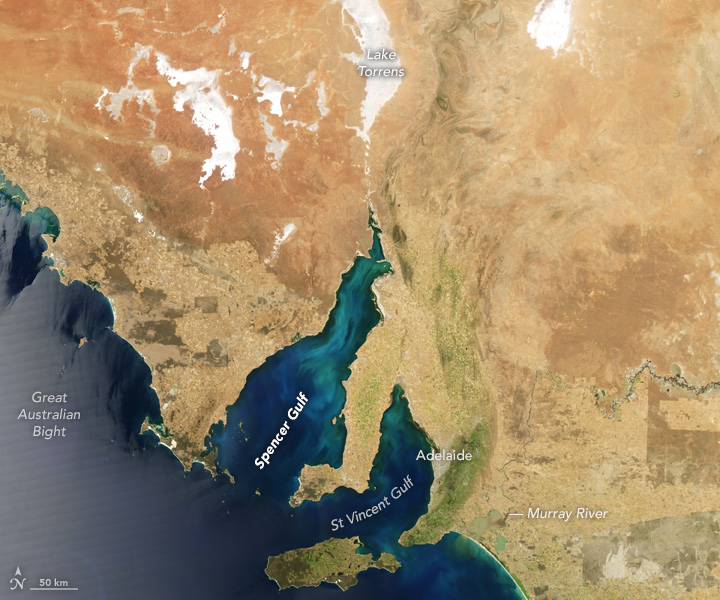 Instead of algae, the colors in Spencer Gulf are likely the result of churning waters that rake up sediment, Cetinić and McKinna said. According to earlier research, the Gulf is located at the convergence of two tides, one from the east and one from the west, that raise and lower sea level by as much as 2 meters, four times more than neighboring basins. At times, these two tides sometimes cancel each other out; but on occasion, they combine forces and become far more powerful. That's likely what happened on the day the image was captured, as tides were reported to be at their strongest in the 14-day cycle, Cetinić said.

The milky streaks in the Gulf likely owe their hue to calcium carbonate, the same substance in shells and skeletal structures of organisms like foraminifera, bryozoans, and coralline algae. This makes this sediment whitish, compared to the organic sediment in a brown plume toward the bottom of the Murray River. 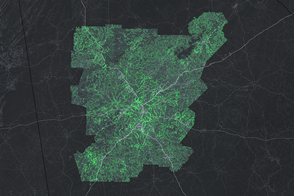 Greening the Gulf of Finland

Blue-green algae are thriving in warmer-than-normal waters this summer.