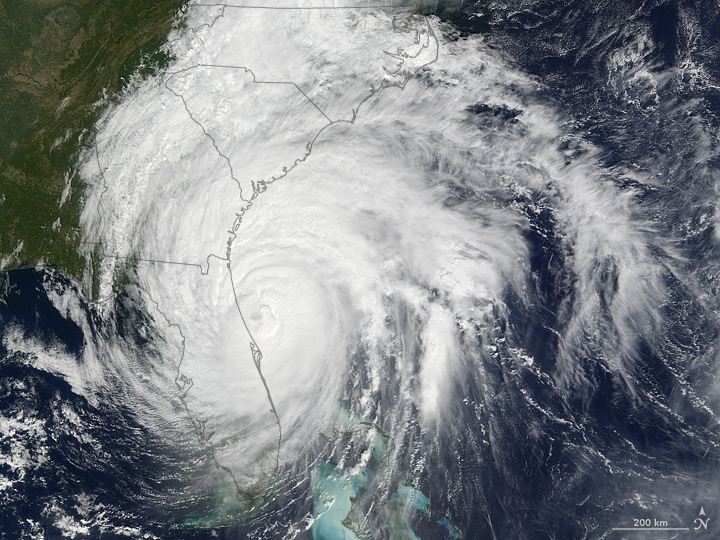 After devastating Haiti earlier this week, Hurricane Matthew closed in on the Atlantic coast. On October 7, 2016, the storm’s western eyewall brushed parts of Florida, the National Hurricane Center reported.

This natural-color image was acquired at 12:00 noon, Eastern Time (16:00 Universal Time) on October 7, 2016 by the Moderate Resolution Imaging Spectroradiometer (MODIS) on NASA’s Terra satellite. An hour before the image was taken, the storm was located roughly 35 miles (55 kilometers) northeast of Daytona Beach, Florida, and headed toward the north-northwest at a pace of 13 miles (20 kilometers) per hour. It had top sustained winds of 120 mph (195 kmh), with higher gusts.

Matthew strengthened to a major hurricane on September 30. After it made landfall in Haiti on October 4, the hurricane leveled entire villages. According to preliminary reports, more than 840 people have died, and tens of thousands of homes have been ruined.

In the U.S., a hurricane watch has been issued from Surf City to Cape Lookout, North Carolina. “Matthew is expected to produce total rain accumulations of 8 to 12 inches (20 to 30 centimeters) over the Atlantic coast of the United States from central Florida to eastern North Carolina, with possible isolated maximum amounts of 15 inches (38 cm),” said the National Hurricane Center.