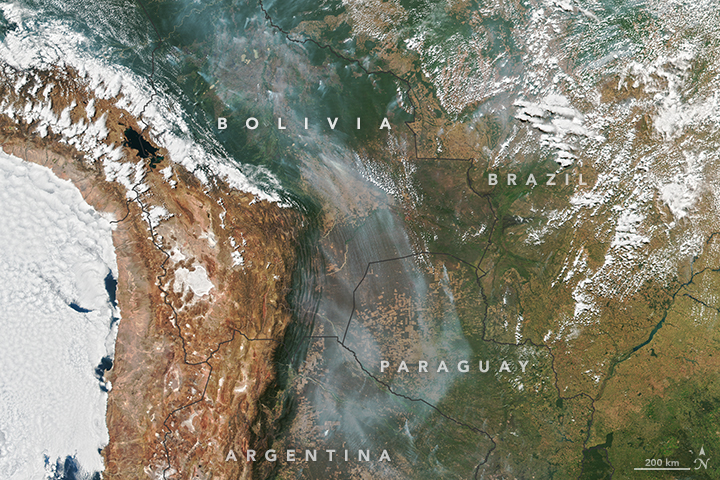 Many fires were burning in Bolivia, Paraguay, Argentina, and Brazil when the Visible Infrared Imaging Radiometer Suite (VIIRS) on the Suomi NPP satellite captured this image on August 25, 2016. This natural-color image shows smoke drifting over South America. Fire activity was concentrated in Bolivia, where the government has declared a state of emergency.

While some fires occur naturally in this part of South America, most of these fires were probably set deliberately to clear land for crops or pasture. Drought conditions, combined with gusty winds, allow land management fires to expand into uncontrolled wildfires.

Wildfire season in the southern Amazon runs from roughly June to November, with peak activity usually occurring in September. The number and intensity of the fires correlates with climate anomalies such as El Niño and the Atlantic Multi-decadal Oscillation. These cyclical changes in ocean temperatures affect global precipitation patterns and the likelihood of drought in South America. The strong El Niño of 2015–16 reduced rainfall across the Amazon during the wet season, meaning forecasters expected an unusually intense fire season.

NASA Earth Observatory image by Joshua Stevens, using VIIRS data from the Suomi National Polar-orbiting Partnership. Suomi NPP is the result of a partnership between NASA, the National Oceanic and Atmospheric Administration, and the Department of Defense. Caption by Adam Voiland.

Management and wildfires put a pall of smoke over South America in August 2016.