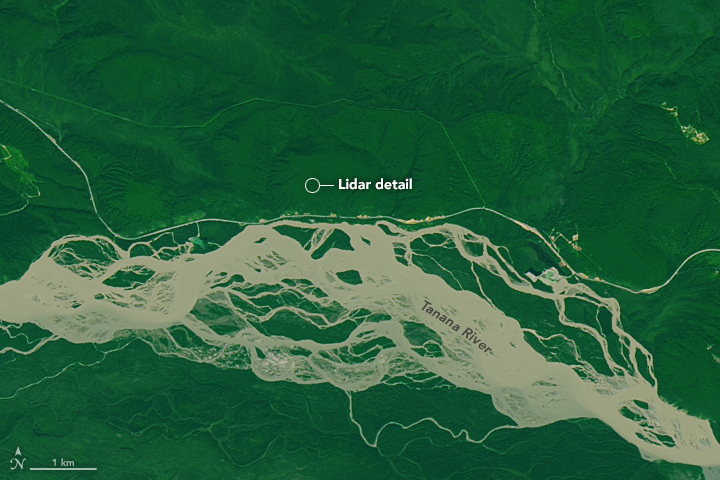 In a birch forest in the Tanana Valley of interior Alaska, there’s a stake in the ground with pink plastic tape attached. More than three decades ago, a plane flew over that stake to take stereoscopic pictures of the surrounding plot; scientists on the ground trekked out to survey the trees and vegetation. Now scientists have returned to the site, using advanced airborne instruments and satellite images to survey the plot again and learn something about changes in interior Alaska.

The re-surveying of the Tanana Valley is a key part of the Arctic Boreal Vulnerability Experiment, or ABoVE. “Our overall objective is to make use of a really rich historical inventory dataset that we have available,” said Hans Andersen, an ecologist with the U.S. Forest Service and co-investigator on the NASA-funded project. “We’ll be interested in changes in the vegetation cover that could be due to climate change over that period of time.”

Satellites have provided periodic, wide views of Tanana Valley over the years. The top image, for example, was acquired on July 14, 2016, by the Operational Land Imager (OLI) on Landsat 8. The satellites provide a relatively continuous record of change, but the coarse resolution of the data does not capture tree-scale information. 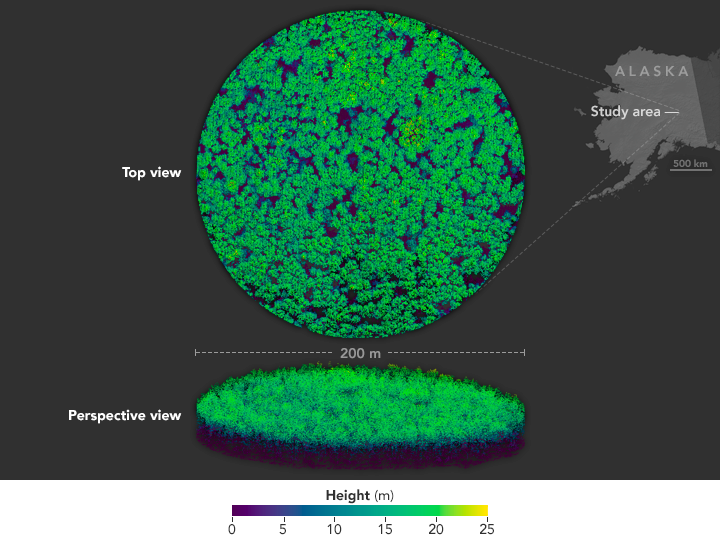 Instead, high-resolution details about tree heights, species composition, and moisture conditions are collected from the sky. On July 31, 2014, NASA Goddard’s Lidar, Hyperspectral, and Thermal (G-LiHT) airborne imager flew along the Tanana Valley and over the ground survey site, acquiring a three-dimensional view of the structure of the forest canopy (above). Data are typically collected in long strips, but the data visualized here extend in a 100 meter (330 foot) radius from the center of the survey site. Shades of yellow represent the tops of the tallest trees (up to 25 meters), while the darkest purples are the ground. Note that many of the trees in this plot appear fairly uniform in height.

On July 14, 2016, scientists got an even closer look at this patch of forest (below). After scrambling up a hillside covered in prickly bushes and thick shrubs, researchers surveyed vegetation within a 16-meter (53-foot) radius from the site’s center. The greenery was mostly birch trees, with a few aspen and white spruce—just sparse enough to let some sun filter through to shrubs, seedlings, moss, and lichens on the ground. 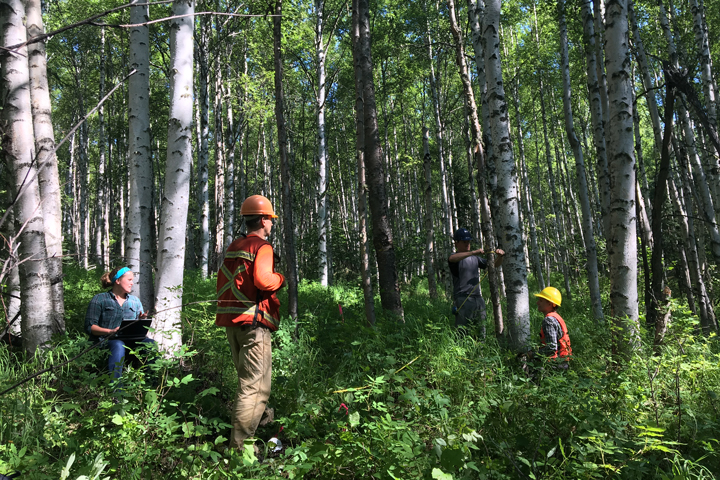 The different sources of data complement each other, Andersen said. Ground surveys allow researchers to identify and count individual trees, while aerial photos can cover a wider area.

The recent work in the Tanana Valley is part of a broad effort to study the environmental and societal effects of climate change. The multi-year ABoVE field campaign is designed to investigate the ecological impacts of the rapidly changing climate in Alaska and northwestern Canada—such as thawing permafrost, wildfires, and changes to wildlife habitats. You can follow ABoVE and other ongoing NASA field campaigns on the Earth Expeditions web site and blog.