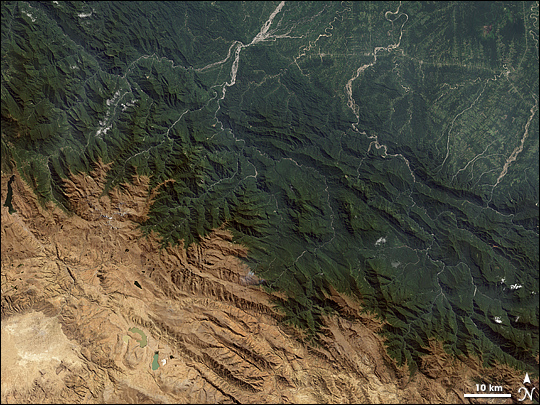 More than 7,000 kilometers (4,400 miles) long and more than 500 kilometers (300 miles) wide in places, the Andes Mountains encompass a wide range of climates and habitats, from snow-capped mountain peaks to rainforests to high deserts. This picture, acquired by NASA’s Landsat 7 satellite, shows a dramatic change in landscape about 250 kilometers southeast of la Paz, the capital of Bolivia.

Probably the most striking feature in this natural-color image is the dramatic change between the tan tones in the southwest and the deep green to the north and east. The arid southwest is in the mountains’ rain shadow. When prevailing easterly winds push air up and over mountains, the cool temperatures of the high altitudes chill the air; moisture condenses and falls as rain or snow on the windward slopes. After cresting the mountain, the remaining air warms and dries as it heads down the leeward (rain-shadowed) slopes; these slopes receive little precipitation. Offshore, the cool ocean current, known as the Peru Current or the Humboldt Current, likely contributes to the aridity along the coast as well (the coastline is southwest of this image). Although they can produce fog, cool ocean waters do not produce a great deal of precipitation. The boundary between tan and deep green in this image shows the boundary between an arid landscape and a rainforest. In the northeast, herringbone patterns show areas of deforestation.

The Andes are the world’s highest mountain range outside Asia, and they have gradually yielded their secrets to curious researchers. Geologists had long believed that the Andes rose at a slow but steady pace, but in 2008, a research team proposed that the Andes experienced punctuated periods of rapid growth. They hypothesized that, roughly 8 million years ago, the Central Andean Plateau rose by 1.5 kilometers in 1 million years—an astonishing pace by geologic standards. The growth spurt might have resulted from the peeling away of dense rock in Earth’s crust at the base of the mountain range. Unencumbered by the heavy anchor, the mountains would have risen rapidly.