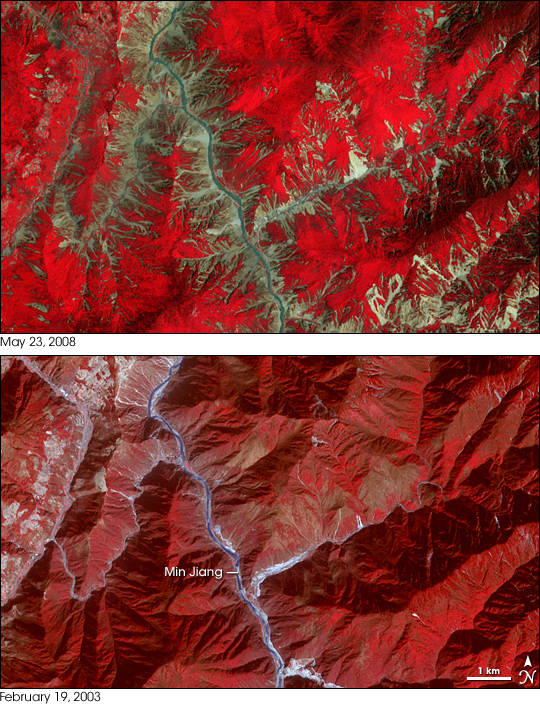 The earthquake that struck China’s Sichuan Province in May 2008 collapsed more than buildings. It also destroyed mountain ridges, sending avalanches of rock down their slopes. Besides directly claiming many lives, these landslides complicated rescue and cleanup efforts in the aftermath of the quake.

These images, acquired by the Advanced Spaceborne Thermal Emission and Reflection Radiometer (ASTER) on NASA’s Terra satellite, show changes in the landscape before and after the earthquake that struck on May 12, 2008, and the resulting aftershocks. The region shown is roughly 150 kilometers (90 miles) from the quake’s epicenter. The river running through the image is Min Jiang. In these false-color images, red indicates vegetation; blue-gray indicates bare ground, buildings, and paved areas; and deep blue indicates water.

Some differences between the images result from the seasons in which they were acquired. In the February 19, 2003, image (bottom) the terrain seems more rugged because the Sun’s low angle cast long shadows at that time of year. Likewise, the brighter red hues in the May 23, 2008, image (top) may result in part from more robust vegetation growing in late spring.

The most dramatic difference between the images, however, is the abundance of bare-ground areas along mountain ridges. Many, if not most, of these areas result from landslides triggered by the May 12 earthquake, and potentially by some of the aftershocks. According to David Petley of Durham University, topographic amplification strengthens an earthquake’s effects on a mountaintop where the shaking is maximized. This leads to landslides that start near the top of a ridge and travel all or most of the way to the valley below.

In the years between the acquisitions of these ASTER scenes, China underwent rapid industrialization and urbanization. As a result, some deforestation may have occurred in this region. Deforestation could account for some, but certainly not all, of the bare-ground areas, and it also could have exacerbated the effects of the earthquake-triggered landslides.

As of May 25, 2008, the Sichuan earthquake had created an estimated 30+ landslide dams blocking rivers and streams, such as Yansai Lake. Military personnel and relief workers struggled to clear landslide dams quickly before rising water flooded nearby settlements, but the region’s abundant rainfall made this task more difficult. As of May 27, 2008, authorities estimated that 67,183 people had died, 361,822 had been injured, and 20,790 remained missing.

These images show changes in the landscape before and after an earthquake struck on May 12, 2008.