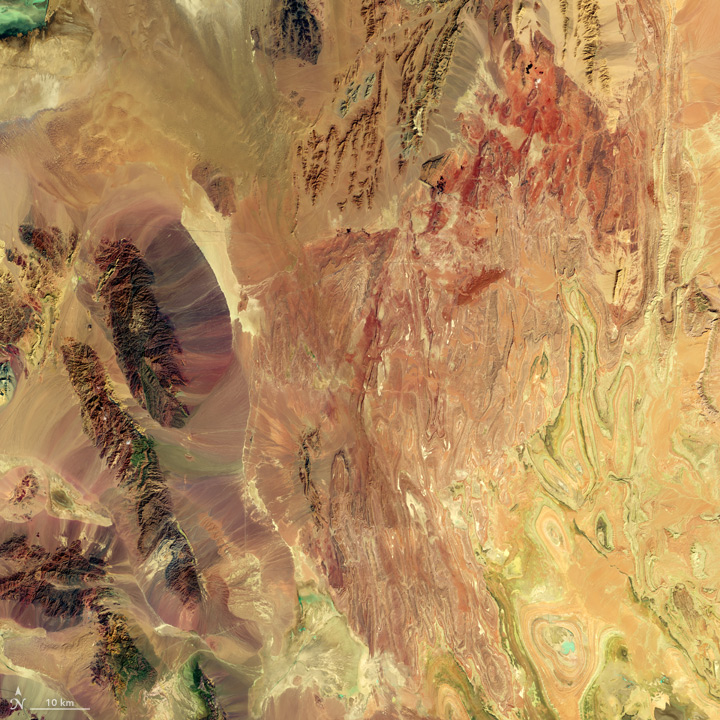 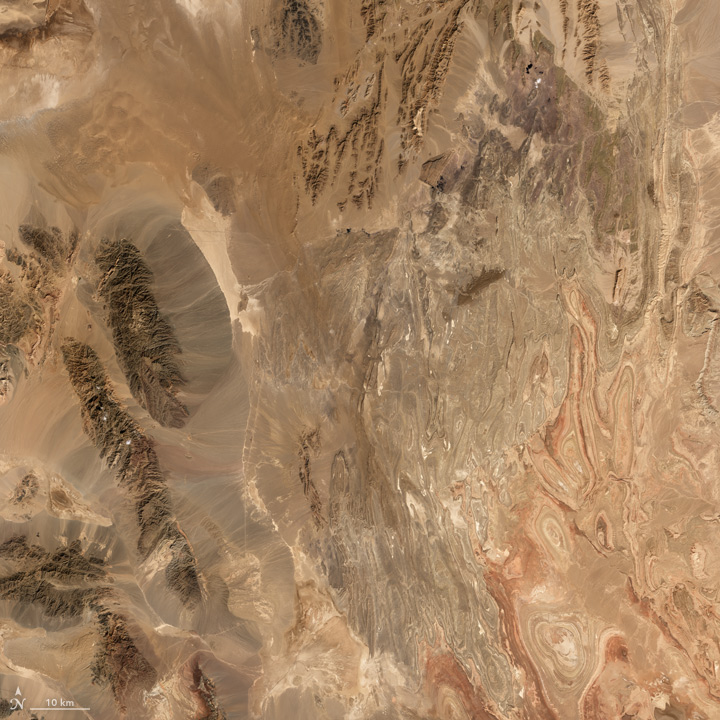 Vivid colors and an extraordinary range of shapes and patterns fill this satellite image of central Iran. The colors have an otherworldly look for good reason. In contrast to the natural-color Landsat images that Earth Observatory normally highlights, this is a false-color image composed from light that is invisible to human eyes.

The Operational Land Imager (OLI) on Landsat 8 collects information in 11 narrow ranges (or bands) of wavelengths on the electromagnetic spectrum. Four of OLI’s bands (1, 2, 3, and 4) detect visible light. Band 1 observes deep blues and violet; band 2 detects blue; band 3 observes green light; and band 4 red light. Moving beyond visible light, band 5 detects the near infrared (NIR), and bands 6 and 7 shortwave infrared (SWIR). Bands 10 and 11 sense the thermal infrared (heat). A U.S Geological Survey chart available here maps out the precise locations and extent of OLI’s bands and how they compare to the Enhanced Thematic Mapper (ETM) on Landsat 7. Read this post from the Landsat program to learn more about band 8 and this story to learn more about band 9.

NASA Earth Observatory normally uses a combination of bands 2, 3, 4 to make natural-color images. Natural-color satellite images combine actual measurements of red, green, and blue light, and are made to show the world as humans see it. Making an image from infrared or thermal observations poses more of a data visualization problem because the human eye cannot see these wavelengths. One common approach is to create false-color images that represent infrared or thermal data with red, green, or blue.

False-color images use at least one non-visible wavelength; the image at the top of this page includes two non-visible bands. The band combination for the false-color Iran image was 6-5-3. In other words, we used red to represent shortwave infrared, green to represent the near infrared, and blue to represent green light.

False-color satellite images often have a vibrant and otherworldly look. Though they can be quite beautiful and even seem artistic, a carefully interpreted false-color image can provide remarkable scientific insights as well. The near infrared (band 5), for instance, can be helpful for understanding vegetation and ecology because healthy plants reflect near-infrared light. In combination with other bands, the near infrared can be used to distinguish between healthy and unhealthy plants. The shortwave infrared (band 6) has different strengths. Using the SWIR band makes it easier to tell the difference between wet and dry areas. It is also useful for geological mapping and mineral prospecting because rocks and soils that look similar in visible light often produce strong contrasts in SWIR.

Compare the false-color and natural-color (second image) versions of the image, which is centered near the border of the Yazd and South Khorosan provinces of Iran. Notice how much easier it is to make out the boundaries between different rock layers and formations in false color. Notice, too, how it is possible to see where water flows down from the dark ridges on the western edge of the false-color image. The streaks of green throughout the false-color image are not representative of vegetation, but rather show the distribution of rock with a particular composition.