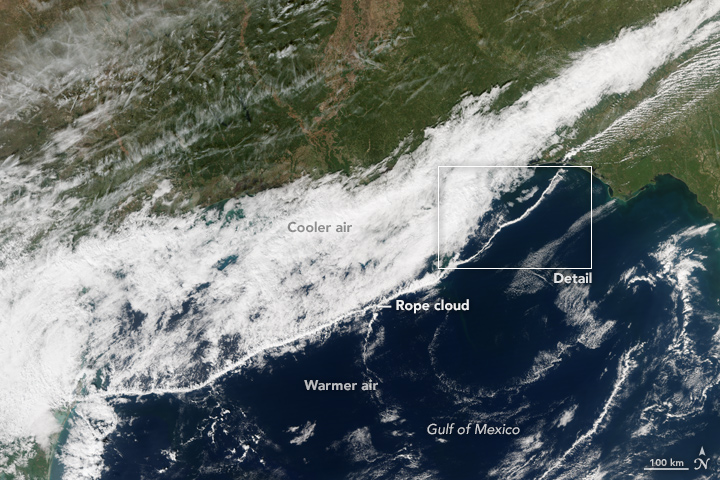 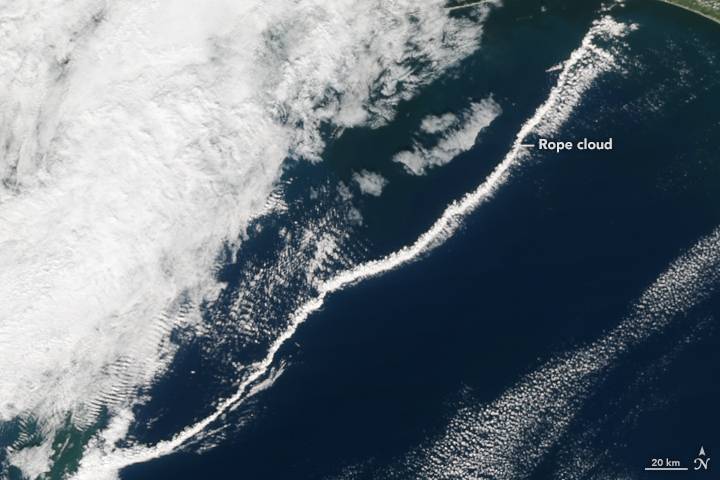 The next time you see a thunderstorm rise up in the distance, take note of the winds. In a few minutes, you will likely notice a cool breeze coming your way. The breeze is evidence of an outflow boundary (or gust front), a term meteorologists use to describe the pools of cool air that tend to spread out ahead of thunderstorms.

From the vantage point of space, outflow boundaries often appear as thin lines of cumulus clouds—sometimes called rope clouds—racing a few kilometers ahead of a front of cooler air. On November 12, 2015, the Visible Infrared Imaging Radiometer Suite (VIIRS) on Suomi NPP observed a rope cloud extending over the Gulf of Mexico. The detail image (lower) shows a section of the rope cloud near the Florida Panhandle. See an animation from the University of Wisconsin that shows the progression of the cloud here.

In this case, the rope cloud, sometimes called an arc cloud, makes visible the dividing line between cooler air to the north and warmer air to the south. As cool, dense air from the outflow boundary pushed into the warm, moist air over the Gulf of Mexico, the warm air was forced upward, causing water vapor to condense into clouds as it rose.

“The outflow boundary had its origins in thunderstorms that occurred earlier in the day. The cold front already had colder, denser air behind it, and the thunderstorms enhanced that with additional cooling from the precipitation,” explained Joe Munchak, a meteorologist at NASA’s Goddard Space Flight Center. “This helped low-level cold air race ahead of the cold front, which appears here as the band of clouds behind the rope cloud.” The reduction in friction from land to water may have also helped the low-level air speed up relative to the upper level air, which explains why the rope cloud appears more distinct over the sea than land.

NASA Earth Observatory image by Jesse Allen, using VIIRS data from the Suomi National Polar-orbiting Partnership. Suomi NPP is the result of a partnership between NASA, the National Oceanic and Atmospheric Administration, and the Department of Defense. Caption by Adam Voiland, with information from Joe Munchak.