Watching the movement of a glacier with an untrained human eye can be like watching paint dry. You know it is happening, but the pace is tedious and slow. Glaciologist Frank Paul of the University of Zurich found a way to speed up the action, and the results are compelling.

Scientists typically measure the motion of glaciers with ground-based GPS measurements or via image-based feature tracking; that is, photographing the movement of surface debris relative to a certain fixed point. While these measurements are reliable, they make it hard to truly grasp the extent and dynamics of ice in motion.

Capitalizing on the long, freely accessible data record from the Landsat series of satellites, Paul decided to create animations that would enable scientists and laymen to witness the complex flow of glaciers. He focused on four regions in the Karakoram mountain range of central Asia, a steep landscape of high terrain (peaks taller than 7,000 meter or 23,000 feet in some places), including behemoths such as K2. He published his results in November 2015 in The Cryosphere.

The animation above shows the movement of ice and debris near Panmah Glacier in Pakistan, near Central Karakoram National Park. The 17 false-color images were captured between August 1990 and July 2015 by the Thematic Mapper on Landsat 5, the Enhanced Thematic Mapper Plus on Landsat 7, and the Operational Land Imager on Landsat 8. There is roughly one image per year except between 2003 and 2011, when various satellite issues and coverage gaps interrupted the record.

Unlike most other glaciers around the world, several glaciers in the Karakorams are rapidly advancing. The glaciers alternate between long periods of slow motion and shorter periods when velocities increase by as much as a thousand times their normal speed. The accreting behavior of the region’s glaciers has been labeled the “Karakoram Anomaly.”

Pick out a few features in the animation above and watch the changes. (Small white arrows mark a few of them.) Some ice and debris make significant advances over 25 years; other patches hardly move. This is the peculiar flow of surging glaciers and the regular flow of non-surging glaciers. Lakes appear and disappear atop the ice, terminuses advance, rivers of ice coalesce then separate, and all the while glacial debris dances and swirls.

Paul created these animations to show how dynamic and complex the interactions between glaciers can be, especially in the understudied Karakoram region. This non-quantitative approach has provided insights to how the tributary streams interact with major glaciers. For instance, Paul’s image analysis enabled him to document for the first time the rapid advance of four small, surging glaciers south of the larger Baltoro glacier. (See that area in one of the large file downloads below the image at the top of this page.)

To create his time series, Paul combed through 25 years of 30-meter resolution Landsat imagery and data. He selected images where snow cover did not obscure the glacier boundaries; most of the time, the best images come from the end of summer. “This research was only possible thanks to the free and open Landsat data policy,” Paul said. “Landsat is key to a wide range of applications that support global glacier monitoring and elucidate the impacts of global climate change.” With the images, glaciologists can map glacier extents, trace area and length of glacier changes through time, derive surface velocity, map snowlines, and calculate albedo for mass and energy balance calculations.

Image of the Day Land Snow and Ice World of Change 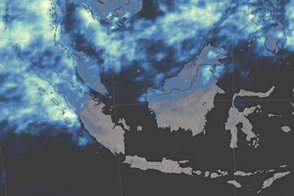 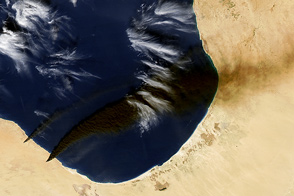 Turkish Glaciers Shrink By Half 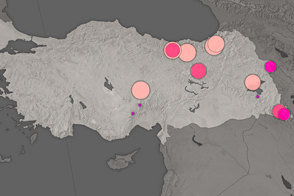