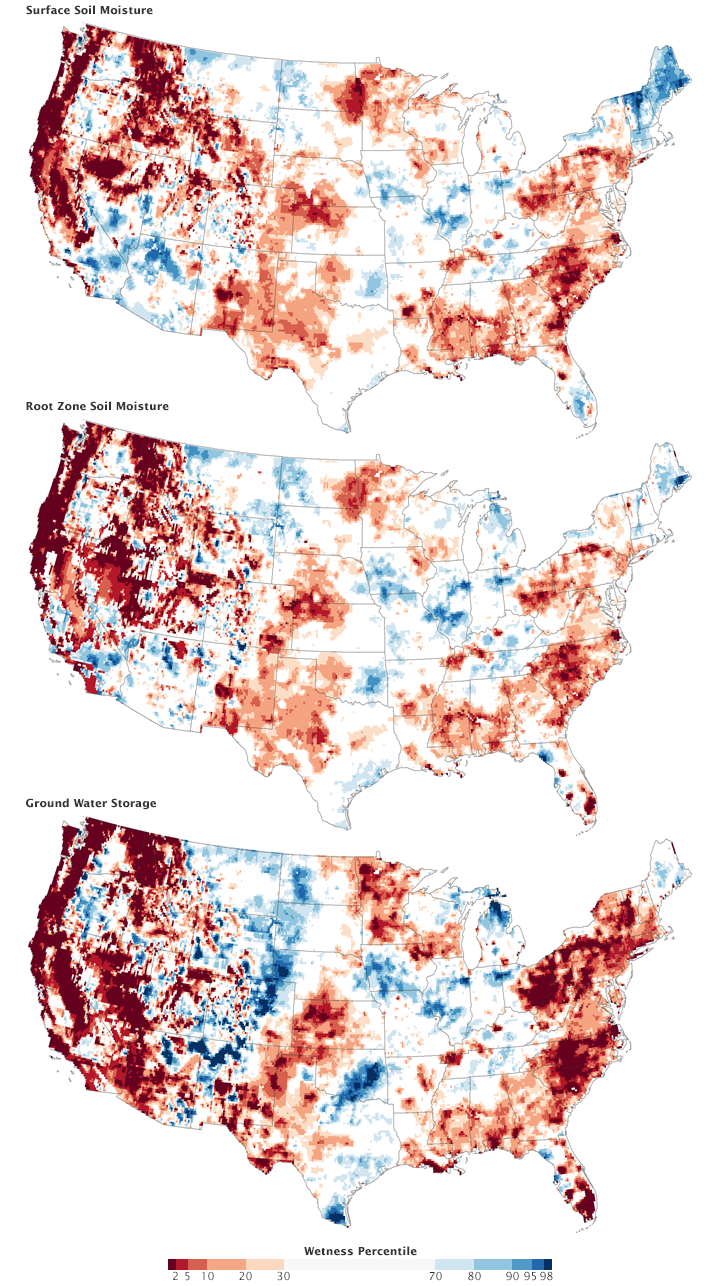 At the end of summer 2015, the western United States continues to face a deep, ongoing drought. Conditions were particularly severe in California, Oregon, and Washington, where below-average precipitation has had a large, lasting effect on water supplies.

The shortage is visible to satellites that detect the movement and depletion of water supplies at and below Earth’s surface. The maps above were produced with data from the Gravity Recovery and Climate Experiment (GRACE) satellites, combined with other satellite and ground-based measurements. They show the relative amount of water stored near the surface and underground as of September 14, 2015.

The maps do not show an absolute measure of wetness, or water content. Instead they show how water content in mid-September 2015 compares to the average for the same time of year between 1948 and 2012. Dark red represents areas where dry conditions have reached levels that historically occur less than 2 percent of the time (once every 50 or more years).

The top map shows moisture content in the top 2 centimeters (0.8 inches) of surface soil. States near the coasts were significantly drier than normal, while the Southwest and Midwest regions were also affected but to a lesser extent.

However, it takes time for the effects of rainfall or drought to be felt deeper in the ground, which explains the differences between the three maps. The middle map depicts moisture in the “root zone,” or the top meter (39 inches) of soil; the third map shows the state of groundwater in shallow aquifers. While the eastern United States does not show as severe an anomaly at the surface, many aquifers have not recovered from previous deficiencies.

Western states, meanwhile, show far-below-normal conditions at all depths due to the long-term drought. California, for example, is in its fourth year of severe drought. Early in 2015, the Los Angeles Department of Water and Power dammed the Los Angeles Aqueduct to conserve the limited snowmelt from the Eastern Sierra; for the first time since 1913, the aqueduct stopped carrying runoff from Owens Valley. By April, state officials announced there was no snow in the Sierra Nevada for the first time in 75 years of measurements. The announcement spurred researchers to launch a study of tree rings in the Central Valley. They found that mountain snow—which California relies on for water—has not been so low since the 1500s.

According to the U.S. Drought Monitor, areas in Washington and Oregon also saw severe or extreme drought conditions in mid-September. As of September 15, extreme drought spanned 67 percent of both states. Low winter snowpack played a role in the summer drought in these states as well.

Drought was ongoing at the same time that the region saw soaring temperatures. According to Weather Underground blogger Christopher Burt, summer 2015 was poised to become the warmest on record in Washington and Oregon. 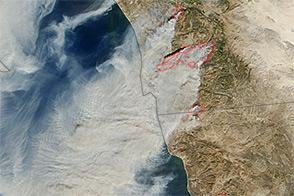