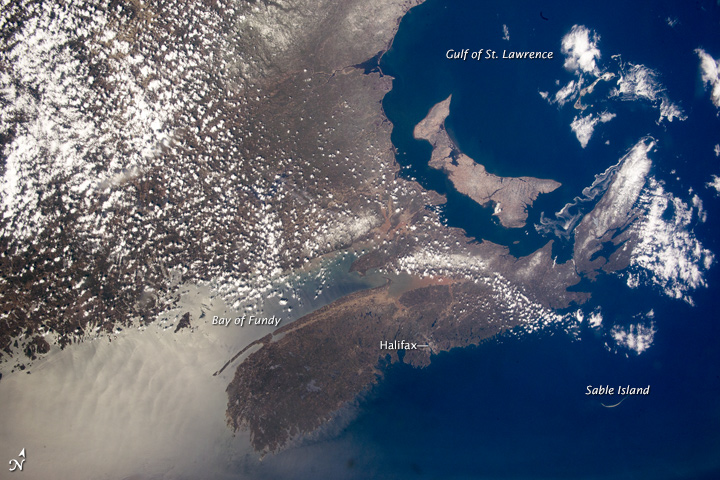 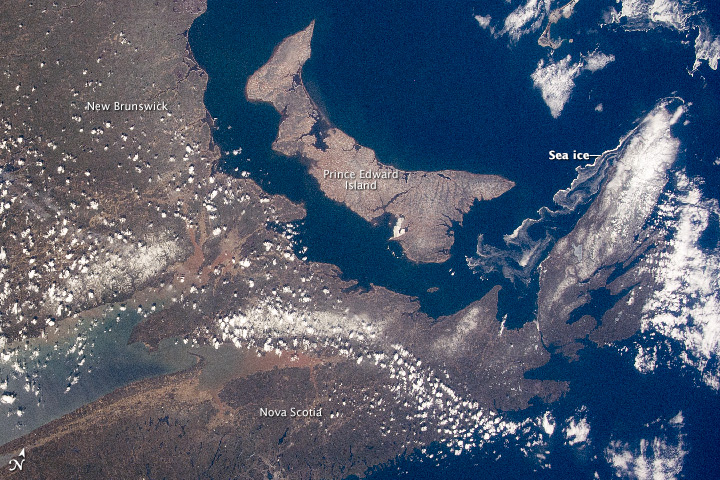 An astronaut aboard the International Space Station shot a near-vertical (nadir) photograph with a wide-angle lens. Taken at nearly the same focal length as the human eye, the image (top) allows us to experience Earth as the crew sees it. The second image is simply a tighter crop of the first.

In the photo, the characteristic coastline of the Nova Scotia peninsula (on Canada’s eastern seaboard) is partly separated from the mainland by the Bay of Fundy. The bay experiences the largest tidal fluctuations (16 meters, or 50 feet) in the world. The enormous exchange of water twice a day stirs up much of the red sediment visible in the headwaters. The bright reflection of sunlight (lower left) shows intersecting tidal features in the sea surface resulting from both the Bay of Fundy tides and those propagating in from the Atlantic Ocean.

In the closeup (second image), timber cuts make linear patterns on the eastern part of the boat-shaped province of Prince Edward Island. Situated in the Gulf of St Lawrence, it is Canada’s smallest and only island province. To the northeast, a long tendril of sea ice streams south from Nova Scotia’s clouded, northernmost cape.

Cities are difficult to see from space in daylight hours. Only Nova Scotia’s capital, Halifax, stands out with any clarity against the dark landscape and sea surface. About 300 kilometers (200 miles) east of Halifax, the sand spit known as Sable Island is a prominent shape well known to astronauts who often take photos of the island. This sweep of sand, 35 kilometers (22 miles) from tip to tip, has only five inhabitants, but receives visits from tourists as one of Canada’s national parks.

Astronaut photograph ISS043-E-175665 was acquired on May 6, 2015, with a Nikon D4 digital camera using a 22 millimeter lens, and is provided by the ISS Crew Earth Observations Facility and the Earth Science and Remote Sensing Unit, Johnson Space Center. The image was taken by a member of the Expedition 43 crew. The image has been cropped and enhanced to improve contrast, and lens artifacts have been removed. The International Space Station Program supports the laboratory as part of the ISS National Lab to help astronauts take pictures of Earth that will be of the greatest value to scientists and the public, and to make those images freely available on the Internet. Additional images taken by astronauts and cosmonauts can be viewed at the NASA/JSC Gateway to Astronaut Photography of Earth. Caption by M. Justin Wilkinson, Texas State University, Jacobs Contract at NASA-JSC.

Astronauts capture a glimpse of the unique coastlines and islands of Canada’s Maritime Provinces.