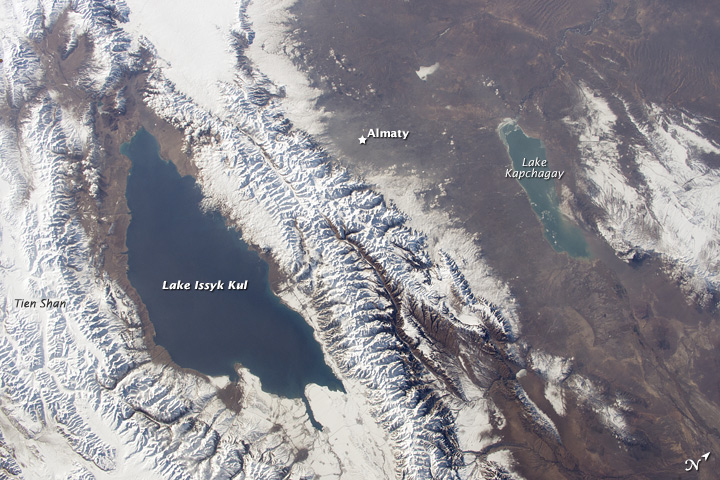 This photograph was taken as astronauts aboard the International Space Station flew over one of the great mountain ranges of central Asia, the Tien Shan. Lake Issyk Kul (182 kilometers long) is among the largest lakes in the world; it is the second largest mountain lake behind Lake Titicaca in South America.

The lighter blue tone of the Kapchagay reservoir reveals that it is much shallower than the dark blue Issyk Kul. Between the lakes on the lower flanks of the mountains, the city of Almaty is barely visible. Compared with the atmospheric clarity over much of the region, dull gray smog blanketed Kazakhstan’s largest city on this winter day.

Lake Issyk Kul is a Ramsar wetland of globally significant biodiversity and forms part of the Issyk-Kul Biosphere Reserve. The lake has wider historical interest as a way station along the Silk Road, the ancient overland trade route between Europe and the Far East. Significant ruins dot the shores. Some historians have argued that this part of central Asia was the point of origin for the Black Death (plague) that moved along the Silk Road to Europe and Asia during the fourteenth century.

Astronaut photograph ISS042-E-295032 was acquired on February 28, 2015, with a Nikon D4 digital camera using a 50 millimeter lens, and is provided by the ISS Crew Earth Observations Facility and the Earth Science and Remote Sensing Unit, Johnson Space Center. The image was taken by a member of the Expedition 42 crew. The image has been cropped and enhanced to improve contrast, and lens artifacts have been removed. The International Space Station Program supports the laboratory as part of the ISS National Lab to help astronauts take pictures of Earth that will be of the greatest value to scientists and the public, and to make those images freely available on the Internet. Additional images taken by astronauts and cosmonauts can be viewed at the NASA/JSC Gateway to Astronaut Photography of Earth. Caption by M. Justin Wilkinson, Texas State University, Jacobs Contract at NASA-JSC.

Situated in the central Asian nation of Kyrgyzstan, it is the second largest mountain lake in the world and an important site for biodiversity and Silk Road history.