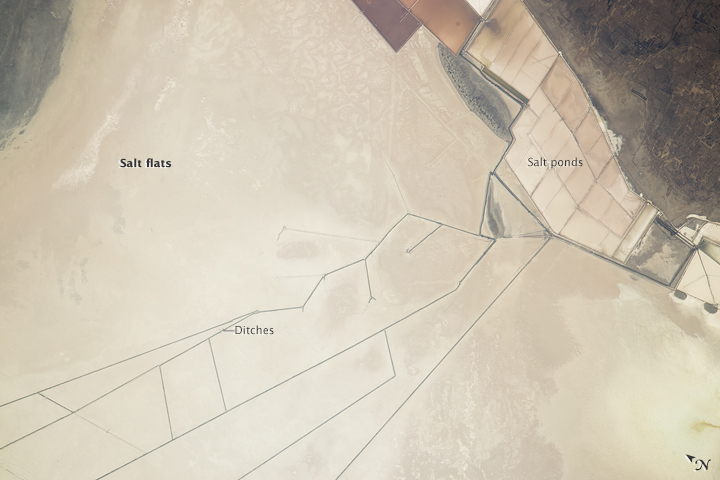 Astronauts aboard the International Space Station took this photograph as they flew over western India near the Pakistan border. The Rann of Kutch is a long, narrow salt flat that stretches inland in an almost straight line for 325 kilometers (200 miles) from the Arabian Sea coast. Rann comes from a Hindi word meaning desert, and the region is famous for its marshy salt flats which become snow white when the summer monsoon flood waters dry up. These inhospitable lowlands are resource-rich with minerals and natural gas deposits.

Angular evaporation ponds along the floor of the Rann are the heart of a major salt-producing industry. The straight lines across the image are ditches that help control the flow of salt-rich water. The scale is difficult to judge in this landscape of abstract shapes; in this case, the image shows an area roughly 16 kilometers (10 miles) wide. The light green tint (lower right) is shallow water from a small river that drains dark-toned farmland (top right).

Thousands of years ago, the Rann was a shallow arm of the Arabian Sea. Land uplift caused by tectonic forces then closed off the connection with the sea, creating a vast lake that was still navigable during the time of Alexander the Great.

Astronaut photograph ISS043-E-101645 was acquired on April 11, 2015, with a Nikon D4 digital camera using an 1150 millimeter lens, and is provided by the ISS Crew Earth Observations Facility and the Earth Science and Remote Sensing Unit, Johnson Space Center. The image was taken by a member of the Expedition 43 crew. The image has been cropped and enhanced to improve contrast, and lens artifacts have been removed. The International Space Station Program supports the laboratory as part of the ISS National Lab to help astronauts take pictures of Earth that will be of the greatest value to scientists and the public, and to make those images freely available on the Internet. Additional images taken by astronauts and cosmonauts can be viewed at the NASA/JSC Gateway to Astronaut Photography of Earth. Caption by M. Justin Wilkinson, Texas State University, Jacobs Contract at NASA-JSC.

Once submerged under an arm of the Arabian Sea, this dry lowland is now rich in salt.