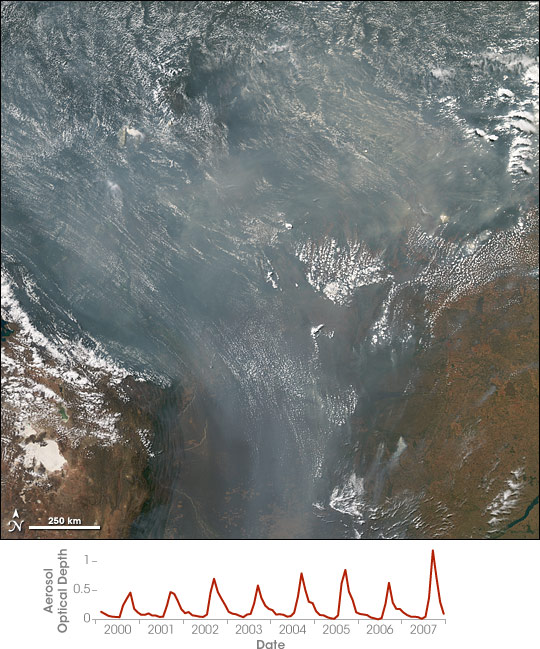 But increasingly, the air over the Amazon is not clear, at least not during the annual dry season. Smoky conditions such as those pictured in this image from the Moderate Resolution Imaging Spectroradiometer (MODIS) on NASA’s Aqua satellite on September 7, 2007, are increasingly common in the late dry season (August-September in the southern Amazon). People set thousands of fires each season to clear new crop or pasture land or maintain existing agricultural areas, generating clouds of smoke that change clouds and rainfall over the entire basin.

A team of scientists led by Ilan Koren of the Weizmann Institute of Science used MODIS observations of smoke (aerosol optical depth) collected between 2000 and 2007 to document the yearly pattern of smoke over the Amazon. The graph shows their results. Peaks indicate the high smoke levels during the dry season, while valleys indicate the clear air of the rainy season. The team found that smoke aerosols increased through 2005, dropped significantly in 2006, and spiked again in late 2007. A number of factors may explain these trends, including drought in 2005, better monitoring and fire enforcement in 2006, and record-high prices for soy and cattle on global markets in late 2007.

To learn more about trends in fires and smoke in the Amazon in the past decade, please read the feature story Amazon Fires on the Rise.