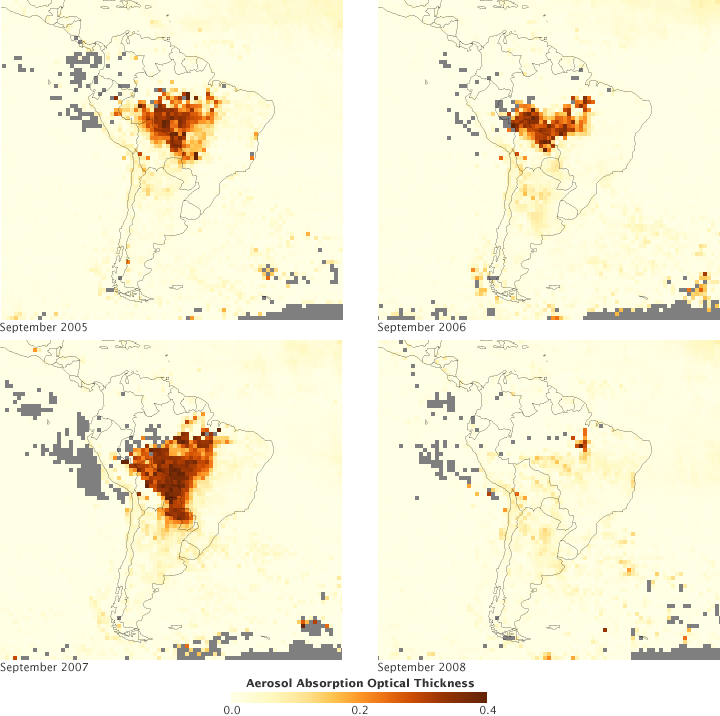 Prior to widespread human settlement and forest clearing, there was no such thing as a fire season in the Amazon Rainforest. The ability of trees to draw water up from deep underground during the annual dry season and a lack of natural fire triggers—lightning rarely occurs without rain—meant that in most places, a fire might occur once in several hundred—or perhaps as many as 1,000—years. Today, burning begins in August, generally peaks in September, and tapers off by October; during these months, the skies over the Amazon fill with smoke.

Recently, atmospheric scientist Omar Torres of Hampton University and several colleagues investigated yearly patterns in the intensity of the Amazon fire season. This series of images from their analysis shows aerosols (particles in the air) over the Amazon each September from the past 4 burning seasons (2005 through 2008). The observations were made by the Ozone Monitoring Instrument (OMI) on NASA’s Aura satellite. The aerosol scale (yellow to dark reddish-brown) indicates the relative amount of particles that absorb sunlight. (In scientific terms, the image shows aerosol absorption optical depth, which is a measure of how much the smoke particles are absorbing and attenuating incoming sunlight.)

Aerosol amounts changed significantly from year to year. Levels were relatively high in 2005, relatively low in 2006, intensified in 2007, and then dropped off dramatically in 2008. Understanding the causes of these wide fluctuations is challenging because although virtually all the fires are linked to human activity, the weather can influence the severity of the burning in any given year. Other influences include market conditions for agricultural commodities like soy and beef and strong or weak enforcement of environmental laws.

For example, the 2005 dry season intensified into a full-blown drought; the drought probably contributed significantly to the heightened fire activity that year. The subsequent drop in 2006 was probably due, at least in part, to a regulatory reaction to the previous season’s devastation. On the other hand, neither the dramatic increase in fires and smoke in 2007, nor the equally dramatic decrease in 2008 seems to be linked to the weather. Scientists studying these patterns conclude that these variations were probably linked to socioeconomic factors like market conditions and regulation. (The Earth Observatory article Amazon Fires on the Rise, published in 2008, covers trends in Amazon burning over the past decade).

Scientists use the amount of smoke and fires in the Amazon as an indicator of how much of the Amazon was cleared or degraded each year, but the burning has other impacts. Fires release large amounts of carbon dioxide into the atmosphere, adding to global warming. And the smoke chokes off cloud formation, which changes the Amazon’s energy balance: fewer clouds mean more sunlight reaches the surface, which leads to warming.