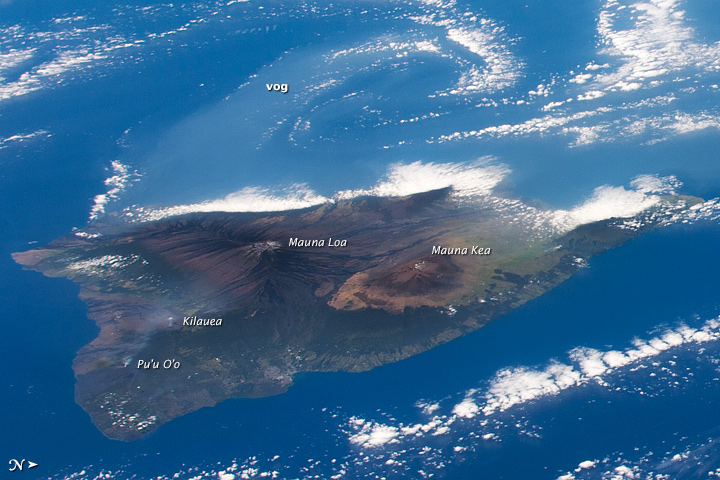 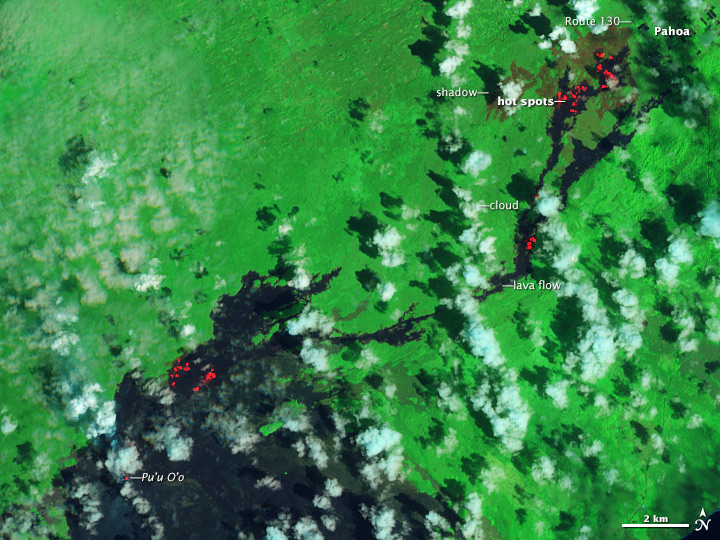 When astronauts on the International Space Station passed over Hawaii on February 18, 2015, they took this photograph of a volcanic plume drifting from Kilauea’s Pu‘u ‘O’o crater. When the Advanced Land Imager (ALI) on the EO-1 satellite passed over about a week later, it captured a more detailed view.

The ALI image offers a relatively clear view of the June 27th lava flow, which was named for the day it began erupting from a vent on Pu‘u ‘O’o. When ALI captured the false-color image on February 26, 2015, the flow remained active and lava lingered a few kilometers southeast of the town of Pahoa. While lava has damaged some property on the outskirts of town, it has not yet entered the heart of the Pahoa.

The ALI image combines shortwave infrared, near infrared, and green light. Since the hot surfaces of active flows radiate shortwave infrared light, they appear red. Vegetation appears light green. Rocky lava flows—up to 50 years old, too young for significant regrowth of vegetation—are black. Popcorn clouds, which are white with a tinge of blue, are scattered throughout the scene.

Residents of Pahoa have been watching the June 27 flow warily for several months as the unusual flow has drawn closer to their community. Lava from Kilauea normally flows south toward the ocean, but the June 27 lava flow has moved in a northeasterly direction instead. The flow began after several new fissures opened up on the northeast flank of Kilauea’s Pu‘u ‘O’o crater in summer 2014.

On February 27, 2015, the Hawaiian Volcano Observatory published the two photographs below. The top image, captured during an aerial survey, shows a depression within Pu‘u ‘O’o crater. The depression formed following the start of the June 27th lava flow. The lower images shows fresh pahoehoe lava on the north flank of Pu‘u ‘O’o. 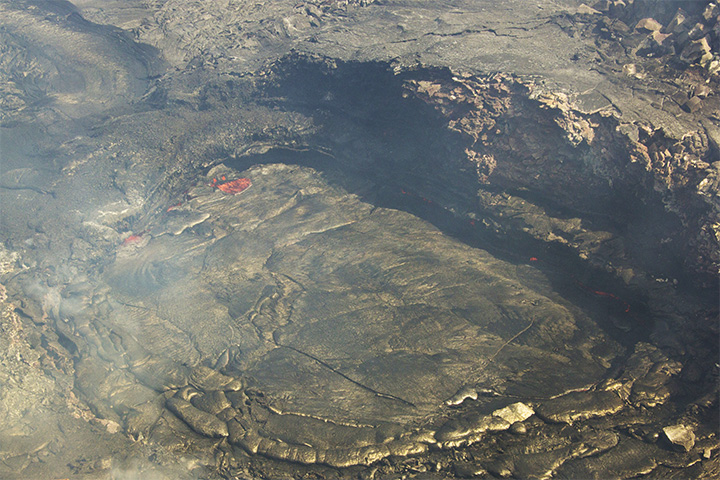 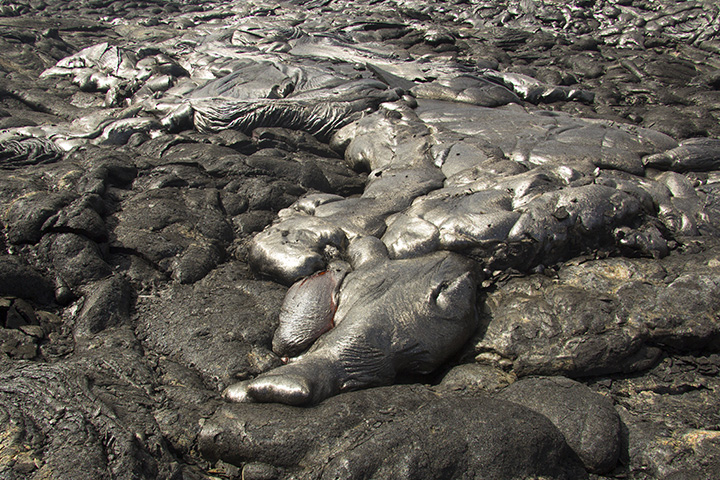 NASA Earth Observatory image by Jesse Allen, using EO-1 ALI data provided courtesy of the NASA EO-1 team. Photographs courtesy of the USGS Hawaiian Volcano Observatory. Caption by Adam Voiland. Astronaut photograph ISS042-E-281151 was acquired on February 18, 2015, with a Nikon D4 digital camera using a 78 millimeter lens, and is provided by the ISS Crew Earth Observations Facility and the Earth Science and Remote Sensing Unit, Johnson Space Center. The image was taken by a member of the Expedition 42 crew. The image has been cropped and enhanced to improve contrast, and lens artifacts have been removed. The International Space Station Program supports the laboratory as part of the ISS National Lab to help astronauts take pictures of Earth that will be of the greatest value to scientists and the public, and to make those images freely available on the Internet. Additional images taken by astronauts and cosmonauts can be viewed at the NASA/JSC Gateway to Astronaut Photography of Earth. 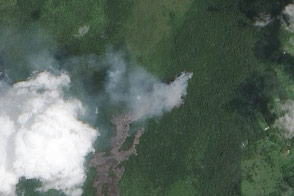