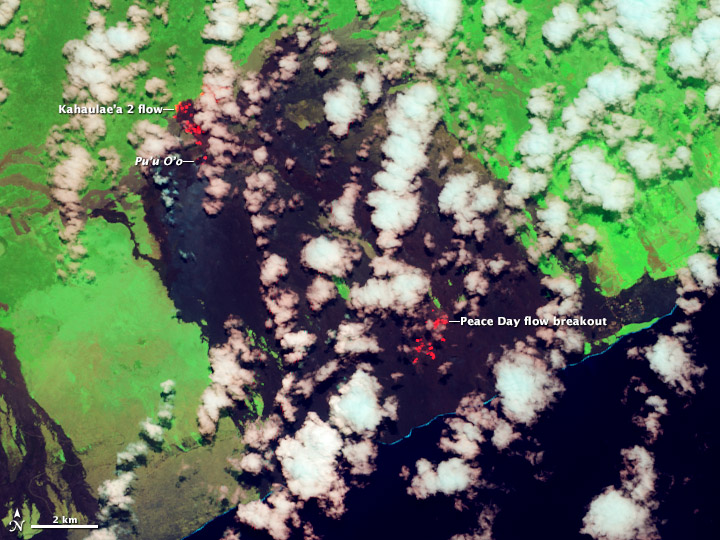 There are currently two active lava flows on Hawaii’s Kilauea Volcano: the Kahaulae’a 2 flow, and the Peace Day flow. Both begin at Pu’u O’o, the center of Kilauea’s current eruption for most of its 30-year history. The Kahaulae’a 2 flow began on May 6, 2013, and currently extends into the forest about 2.6 kilometers (1.6 miles) north of the vent.

Lava from the Peace Day flow—which began on September 21, 2011—runs to the southeast through a lava tube. The tube insulates the lava and allows some of it to flow into the Pacific Ocean, more than 12 kilometers (7.5 miles) from Pu’u O’o. A small portion of the lava is diverted to the surface in a series of breakouts at the base of the pali, cliffs that parallel Hawaii’s southeast coast .

Bright red dots in this false-color (a combination of shortwave infrared, near infrared, and green light) satellite image indicate the location of fresh lava on the surface. Bright green shows dense vegetation, while brown marks sparse vegetation, particularly along the arid coastline. The black region surrounding Pu’u O’o are the lavas emplaced since the current eruption began in 1983. Ocean is blue-black, visually separated from the lava fields by a bright blue-green line of surf. This image was collected on June 27, 2013, by the Advanced Land Imager (ALI) on the Earth Observing-1 (EO-1) satellite. 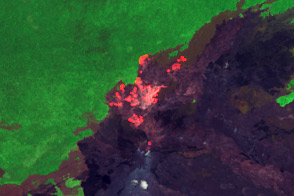