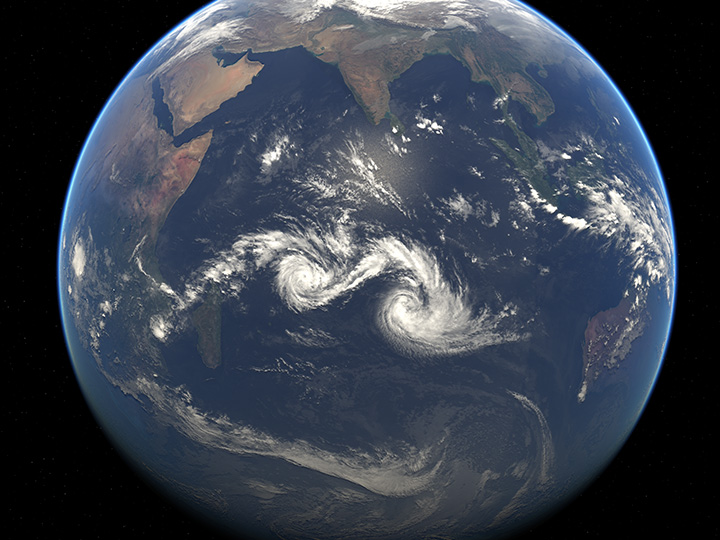 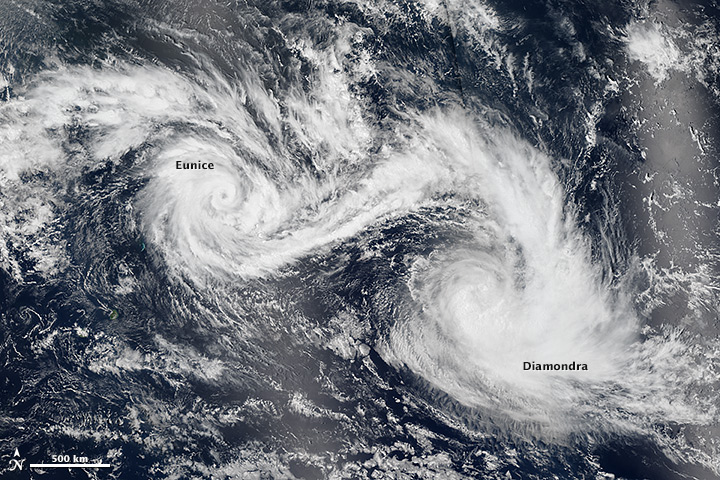 In January 2015, two tropical cyclones— Diamondra and Eunice—swirled over the central Indian Ocean. Neither storm was particularly strong, nor were they expected to make landfall or cause significant damage. But their close proximity offered striking views to satellites.

On January 28, 2015, geostationary satellites maintained by EUMETSAT and the Japanese Meteorological Agency collected the infrared data used to make the composite image at the top of the page. The Visible Infrared Imaging Radiometer Suite (VIIRS) on Suomi NPP captured the lower image, another composite. Note that three separate swaths of data (acquired at 07:25 UTC, 09:05 UTC, and 10:50 UTC) were stitched together to produce the VIIRS image.

The two storms were about 1,500 kilometers (930 miles) apart on January 28, 2015, when VIIRS imaged them. Eunice, the stronger of the two, was located to the west of Diamondra. Eunice had maximum sustained winds of about 160 kilometers (100 miles) per hour, while Diamondra’s maximum winds topped out at about 100 kilometers (60 miles). Both storms were moving in a southeasterly direction.

If two tropical cyclones draw near each other, they begin to rotate cyclonically around an axis connecting their centers—something meteorologists call the Fujiwhara Effect. Such binary storms can even merge if their centers get close enough.

“But in this case, the centers of the two vortices appear to be too far apart,” explained Brian McNoldy, a meteorologist at the University of Miami. “As a rough rule of thumb, the centers would need to be separated by less than 10 degrees (about 1,100 kilometers) for them to start rotating about each other in some fashion. From the latest Joint Typhoon Warning Center forecasts, both storms are expected to move to the southeast at about the same speed, so they probably won’t get any closer to each other.”

Meteosat image Copyright EUMETSAT. VIIRS data from the Suomi National Polar-orbiting Partnership. Suomi NPP is the result of a partnership between NASA, the National Oceanic and Atmospheric Administration, and the Department of Defense. Caption by Adam Voiland. 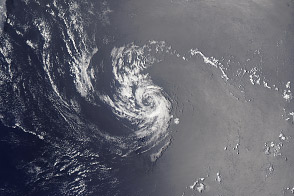