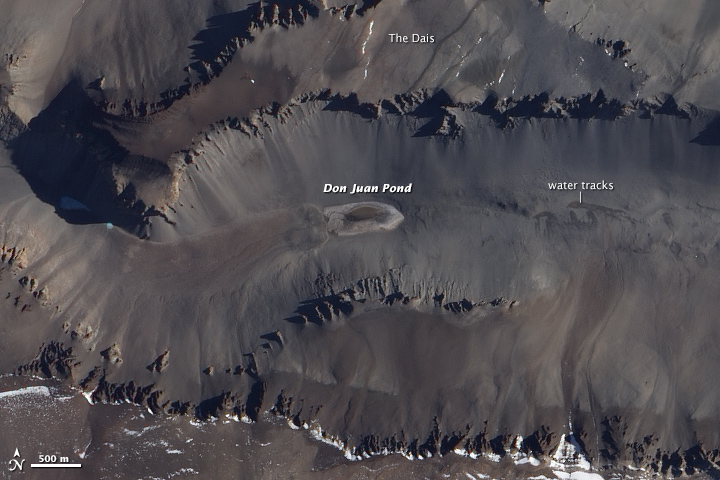 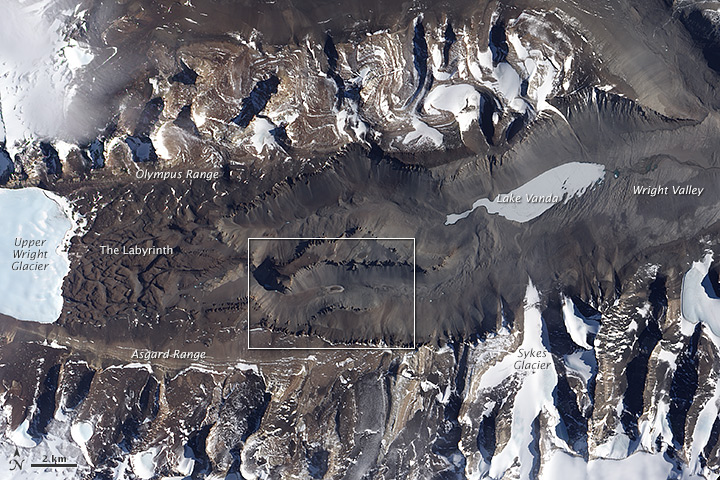 Today’s image is the answer to Earth Observatory’s December Puzzler.

The world’s saltiest body of water is tucked away in a valley in one of the most extreme environments on Earth. It rarely snows and never rains in the McMurdo Dry Valleys. Winter temperatures can drop to -50 degrees Celsius (-58 degrees Fahrenheit), and the few ponds and lakes in the valleys are capped by ice that is several meters thick.

Then there’s Don Juan Pond. The ankle-deep pond in the lowest part of Upper Wright Valley is so salty that its calcium-chloride rich waters rarely freeze. Salt particles lower the freezing point of water by moving between water molecules and impeding the formation of the crystal lattice structure of ice.

With a salinity level over 40 percent, Don Juan is significantly saltier than most of the other hypersaline lakes around the world. The Dead Sea has a salinity of 34 percent; the Great Salt Lake varies between 5 and 27 percent. Earth’s oceans have an average salinity of 3.5 percent.

The Advanced Land Imager (ALI) on NASA’s Earth Observing-1 (EO-1) satellite captured this image on January 3, 2014. The ellipse-shaped lake is situated at the bottom of a basin between the Dais plateau and the Asgard Range to the south. It has a slightly darker hue than the salt-encrusted lake bottom around it.

The lower image shows a broader view of Wright Valley. Notice the network of channels just east of Wright Upper Glacier, an intricate feature eroded into dolerite bedrock known as the Labyrinth. Frozen Lake Vanda is visible to the northeast of Don Juan Pond.

While hydrologists have long thought that groundwater bubbled up from below to feed the pond, recent research by Brown University geologists Jay Dickson and James Head has shown that the water most likely comes from the atmosphere. By setting up cameras that took thousands of time-lapse photographs of the lake, the scientists observed that salts in the soil suck available moisture from the air through a process called deliquescence. These water-rich salts then trickle down slopes toward the pond, often mixing with small amounts of melt water from snow and ice. The process creates dark water tracks on the surface, some of which are visible in the ALI image.

For astrobiologists, one of the most tantalizing aspects of Don Juan Pond is the possibility that its salty water contains microscopic life. If life can survive in such an extreme environment, it would lend credence to the idea that life exists—or once existed—in hypersaline features on Mars. “There is certainly biology in the vicinity of the pond and some evidence for biologic activity in the pond itself, but this activity could be explained by abiotic processes,” said Dickson. ”Mars has a lot of salt and used to have a lot of water.”

NASA Earth Observatory image by Jesse Allen, using EO-1 ALI data provided courtesy of the NASA EO-1 team and the U.S. Geological Survey. Caption by Adam Voiland. Congratulations to Dan Mahr, Lee Saper, and Edwin Clatworthy for being some of our first readers to answer the December 2014 puzzler correctly. 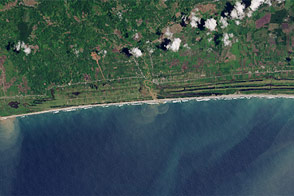 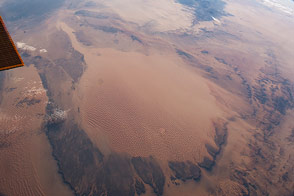