Keeping an Eye on Edouard 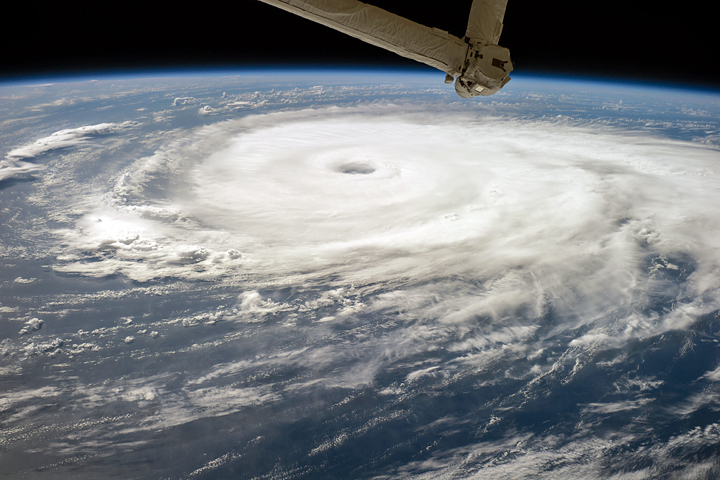 Hurricane Edouard was the fifth named storm and fourth hurricane of the 2014 Atlantic season. And while it never threatened any land masses, it was still closely watched by scientists for what it could tell them about the development and intensification of hurricanes.

This photograph was taken from the International Space Station (ISS) by astronaut Reid Wiseman on September 16, 2014. He was looking almost due south at the storm, which was churning the sea and sky about midway between North America, Africa, and Europe. Shortly before Wiseman took this photograph, Edouard had a central pressure of 955 millibars and sustained winds of 100 knots (115 miles or 185 kilometers per hour), a category 3 hurricane.

On September 14, 16, and 18, NASA and its research partners flew an unmanned Global Hawk aircraft over Edouard as part of the Hurricane and Severe Storm Sentinel (HS3) mission. Mounted on the robotic plane, the Scanning High-resolution Interferometer Sounder sampled the temperature and relative humidity in the clear air around a storm, while the Cloud Physics Lidar observed airborne aerosols—tiny particles of dust, sea salt, and pollution—and the vertical structure of the cloud layers. On the same flights, the Advanced Vertical Atmospheric Profiling System dropped sondes into the storm to measure temperature, humidity, and winds while falling through every level of the troposphere.

On September 20, 2014, NASA will add to its storm-studying tools when the ISS-Rapid Scatterometer (Rapid-Scat) is launched into orbit on a SpaceX commercial resupply rocket. Once installed on the space station, Rapid-Scat will measure near-surface wind speed and direction over the ocean in low and mid-latitudes. A scatterometer is a type of radar that bounces low-energy microwaves off the ocean surface and analyzes the strength of the return signal.

Astronaut photograph ISS041-E-10455 was acquired on September 16, 2014, with a Nikon D3S digital camera using a 60 millimeter lens, and is provided by the ISS Crew Earth Observations Facility and the Earth Science and Remote Sensing Unit, Johnson Space Center. The image was taken by the Expedition 41 crew. It has been cropped and enhanced to improve contrast, and lens artifacts have been removed. The International Space Station Program supports the laboratory as part of the ISS National Lab to help astronauts take pictures of Earth that will be of the greatest value to scientists and the public, and to make those images freely available on the Internet. Additional images taken by astronauts and cosmonauts can be viewed at the NASA/JSC Gateway to Astronaut Photography of Earth. Caption by Mike Carlowicz.

Researchers are deploying a mix of airborne and orbiting tools to unlock secrets of the most potent storms on Earth. 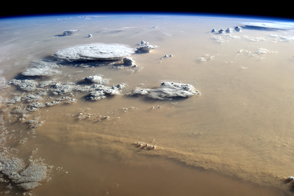 An astronaut on the International Space Station snapped this photograph of Hurricane Earl as a Category 4 storm on August 30, 2010.