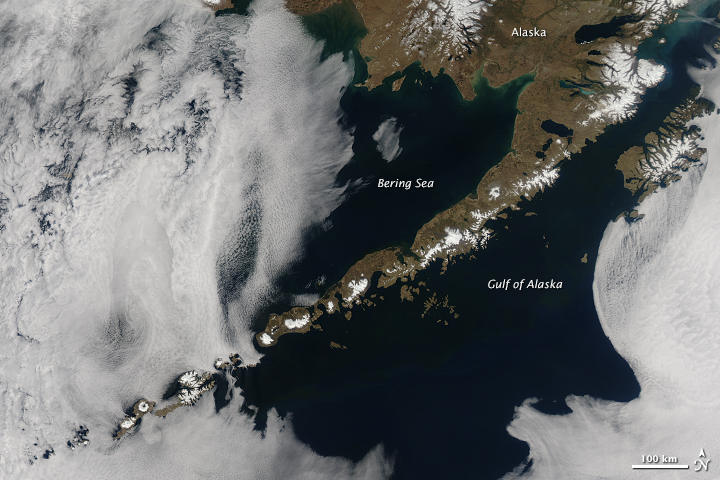 In its northward creep, the Pacific tectonic plate rubs against the North American plate, giving rise to the famous San Andreas and Denali strike-slip faults. In southwestern Alaska, those two plates meet head on, and the Pacific plate sinks beneath the North American plate. In this subduction zone, some of the ocean plate melts and the molten rock pushes to the surface in a string of 40 active volcanoes, forming the Aleutian Islands.

Unusually clear skies allowed the Moderate Resolution Imaging Spectroradiometer (MODIS) on NASA’s Aqua satellite to acquire this image on May 15, 2014. Including the Alaskan peninsula, 52 volcanoes are visible in this scene.

The islands stretch from North America far into the Pacific Ocean like stepping stones to Asia. They form a barrier between the Bering Sea to the north and the Gulf of Alaska and North Pacific Ocean to the south, affecting currents of both water and air. The islands channel the Alaskan Stream, a warm current that circles the Gulf of Alaska and moves west toward Russia’s Kamchatka Peninsula. The islands also influence air currents, as seen in the swirling marine cloud eddies on the north side of the islands.

Stretched across the ocean between two continents, the Aleutians are an important habitat for birds. The islands are part of the Alaska Maritime National Wildlife Refuge, the largest refuge in the United States. More seabirds nest in the Alaska Maritimes than anywhere else in North America. The islands are also an important stopping point for migrating birds. Some 90 species of Asian birds have been spotted in the area, and one species (the shearwater) migrates from the Southern Hemisphere. Several unique bird species are native to the islands, including the Aleutian cackling goose and six subspecies of rock ptarmigan.

The volcanic Aleutian Islands stretch far from North America into the Pacific Ocean like stepping stones to Asia.