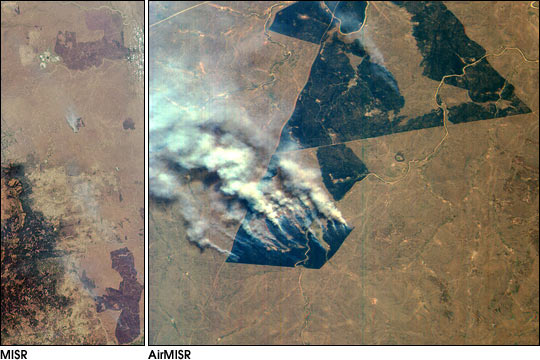 These images of northeastern South Africa, near Kruger National Park, were acquired on September 7, 2000 by the Mulit-angle Imaging Spectroradiometer (MISR). The left image shows an 85-kilometer wide x 200-kilometer long area captured by MISR's aftward- viewing 45-degree camera. At lower left are the Drakensberg Mountains; to the east of this range a large burn scar with thin smoke plumes from still-smoldering fires is visible. Near the top of the image another large burn scar with an open-pit mine at its western edge can be seen. Other burn scars are scattered throughout the image.

Just above the center of the lefthand image is a polygonal burn scar with a set of smoke plumes from actively burning fires at its southwestern tip. The righthand image, which is a “zoomed-in” view of the area, was acquired almost simultaneously by MISR's airborne counterpart, AirMISR, aboard a NASA ER-2 high-altitude aircraft. AirMISR contains a single camera that rotates to different view angles; when this image was acquired the camera was pointed straight downward. Because the ER-2 aircraft flies at an altitude of 20 kilometers, whereas the Terra spacecraft orbits the Earth 700 kilometers above the ground, the AirMISR image has 35 times finer spatial resolution. The AirMISR image covers about 9 kilometers x 9 kilometers. Unlike the MISR view, the AirMISR data are in “raw” form and processing to remove radiometric and geometric distortions has not yet been performed.

Fires such as those shown in the images are deliberately set to burn off dry vegetation, and constitute a widespread agricultural practice in many parts of Africa. These MISR and AirMISR images are part of an international field, aircraft, and satellite data collection and analysis campaign known as SAFARI-2000, the Southern Africa Regional Science Intitiative. SAFARI-2000 is designed, in part, to study the effects of large-scale human activities on the regional climate, meteorology, and ecosystems.