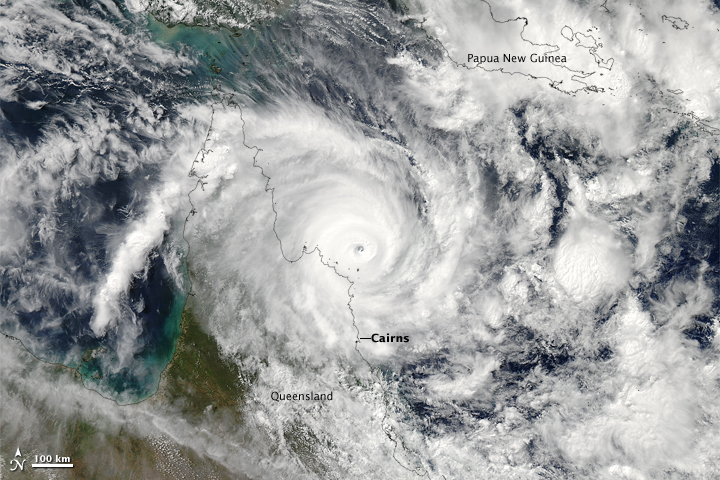 NASA’s Aqua satellite captured this image of Tropical Cyclone Ita as it bore down on Australia’s Cook Peninsula in April 2014. About 30,000 residents of Cairns were asked to evacuate in advance of the storm, and storm surge and wind damage alerts were issued across northern Queensland.

The image was acquired by Aqua’s Moderate Resolution Imaging Spectroradiometer (MODIS) at 2 p.m. local time (0400 Universal Time) on April 11. About two hours later, according to Unisys Weather, the storm had maximum sustained winds of 232 kilometers (144 miles) per hour, a category 4 cyclone.

Ita later made landfall near Cape Flattery, north of Cooktown, around 9 p.m. on April 11. By 4 a.m. local time on April 12, meteorologists reported that the storm was moving south-southwest through the state of Queensland with sustained winds at roughly 140 kilometers (90 miles) per hour. Ita was predicted to remain at least a category 1 cyclone though late afternoon on April 12.

In the days before arriving in Queensland, the tropical weather system that became Ita dumped intense rain on the Solomon Islands, leading to flash floods and landslides that killed at least 20 people and affected at least 50,000. It also brought flooding and power outages to eastern Papua New Guinea and nearby islands.

At the time of this image, the potent storm was headed for landfall in Queensland.