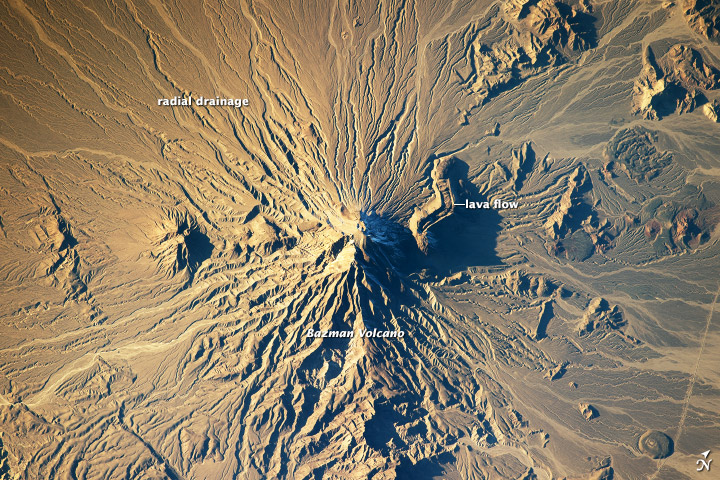 Bazman volcano is located in a remote region of southern Iran, within the Bazman Protected Area of Sistan and Baluchestan Provinces. While the volcano has the classic cone shape of a stratovolcano, it is also heavily dissected by channels that extend downwards from summit. This radial drainage pattern—similar to the spokes of a bicycle wheel—is readily observed from the International Space Station. Such patterns can form around high, symmetric peaks when water runoff and erosion is not constrained by barriers to flow or resistance by geologic materials. The result is essentially even distribution of water runoff channels around the peak.

While there is no historical or geologic record of volcanism at Bazman, some fumarolic activity (gas and steam emissions) have been reported, according to the Smithsonian Institution National Museum of Natural History’s Global Volcanism Program. The summit of the volcano (3,490 meters above sea level) is marked by a well-formed explosion crater. Lava cones on the flanks of the main volcano are associated with well-preserved lava flows; a particularly striking example is visible on the north flank of Bazman. Together, these observations and features suggest that Bazman may be dormant, rather than extinct.

Astronaut photograph ISS038-E-25895 was acquired on January 5, 2014, with a Nikon D3S digital camera using a 400 millimeter lens, and is provided by the ISS Crew Earth Observations experiment and Image Science & Analysis Laboratory, Johnson Space Center. The image was taken by the Expedition 38 crew. It has been cropped and enhanced to improve contrast, and lens artifacts have been removed. The International Space Station Program supports the laboratory as part of the ISS National Lab to help astronauts take pictures of Earth that will be of the greatest value to scientists and the public, and to make those images freely available on the Internet. Additional images taken by astronauts and cosmonauts can be viewed at the NASA/JSC Gateway to Astronaut Photography of Earth. Caption by William L. Stefanov, Jacobs at NASA-JSC.

The cone-shaped summit is dissected by radial channels that appear like the spokes of a wheel. 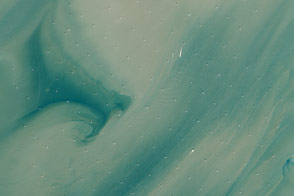 Acquired February 11, 2010, this true-color image shows water discoloration immediately west of the underwater summit of Fukutoku-Okanoba. Clouds overhead might result from vapor emissions, but might be unrelated to volcanic activity.