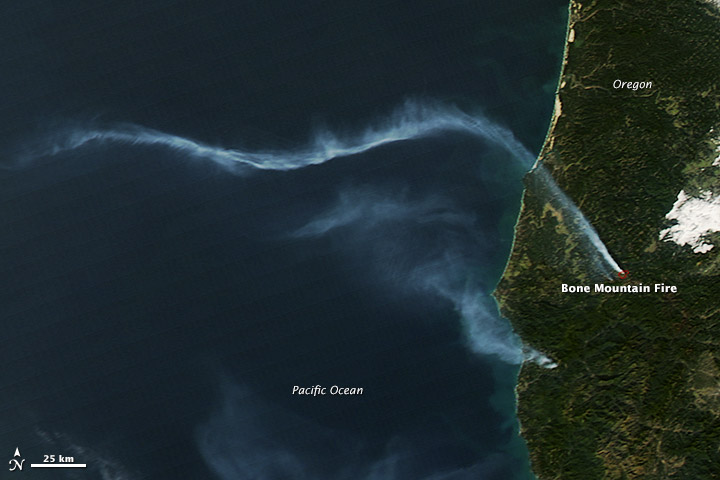 In January 2014, a prescribed fire that was intended to clear out logging debris got out of control in southwestern Oregon. The fire near Bone Mountain charred more than 280 acres (110 hectares) and sent a long smoke plume drifting over the Pacific Ocean.

The Moderate Resolution Imaging Spectroradiometer (MODIS) on the Aqua satellite captured this image of the plume on January 5, 2014. Red outlines indicate hot spots where MODIS detected unusually warm surface temperatures associated with fire. Another prescribed burn, the West Silver fire, also burned out of control to the southwest.

Authorities first lit the prescribed fires on December 6, 2013. They were thought to be out, but later reignited due to abnormally dry and windy conditions. According to the U.S. Drought Monitor, the part of Oregon where the blaze occurred was experiencing “moderate drought.”

When a prescribed fire in southwestern Oregon burned out of control, winds sent a long smoke plume drifting west over the Pacific Ocean.