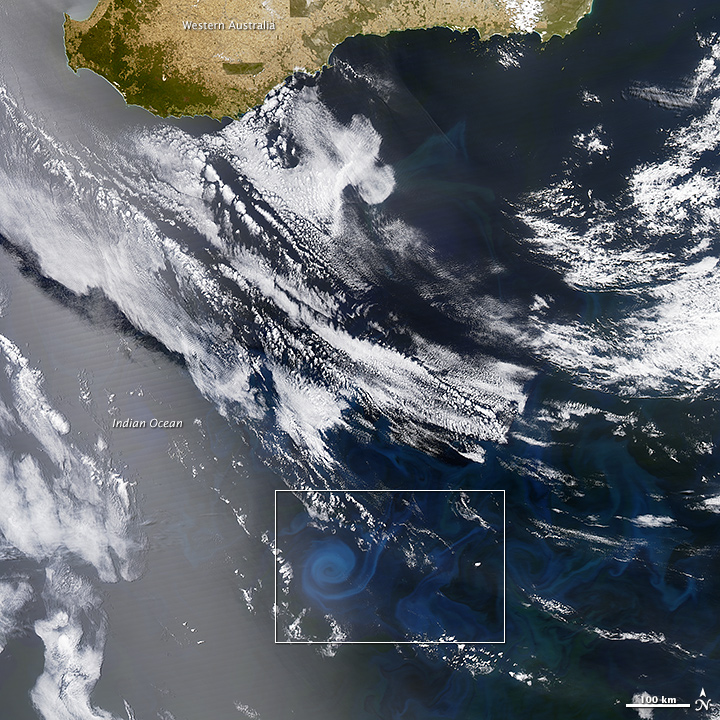 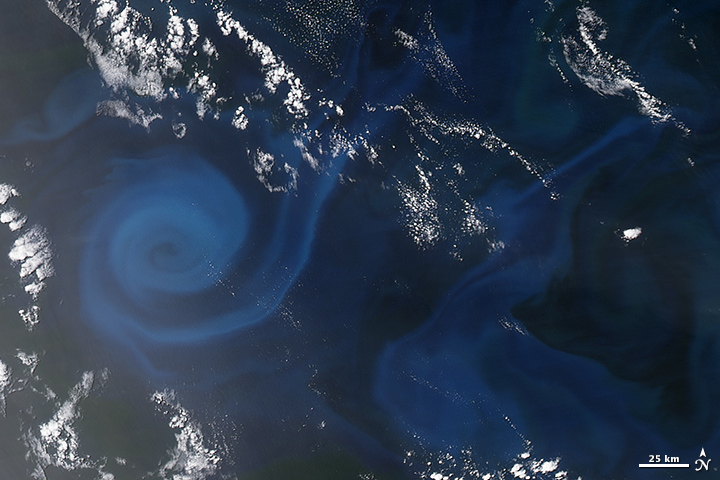 While the northern latitudes are bathed in the dull colors and light of mid-winter, the waters of the southern hemisphere are alive with mid-summer blooms. The Moderate Resolution Imaging Spectroradiometer (MODIS) on NASA’s Aqua satellite acquired this natural-color satellite image of a plankton bloom as it appeared at 1:05 p.m. local time on December 30, 2013. The eddy is centered at roughly 40° South latitude and 120° East longitude, about 600 kilometers off the coast of Australia in the southeastern Indian Ocean.

Like land-based plants, phytoplankton require sunlight, water, and nutrients to grow. Sunlight is now abundant in the far southern latitudes, so nutrients are the limiting variable to phytoplankton growth. Open waters of the ocean can appear relatively barren compared to the nutrient-rich waters near the world’s coasts. In the case of the bloom above, the nutrients may have been supplied by the churning action of ocean currents.

As the close-up image shows, an eddy is outlined by a milky green phytoplankton bloom. Eddies are masses of water that typically spin off of larger currents and rotate in whirlpool-like fashion. They can stretch for hundreds of kilometers and last for months. As these water masses stir the ocean, they can draw nutrients up from the deep, fertilizing the surface waters to create blooms in the open ocean. Other times, they carry in nutrients spun off of other currents.

It is possible that the mesoscale eddy and plankton bloom shown above are related to the “great southern coccolithophore belt” (or the “great calcite belt.”) In late southern spring and summer (roughly November to March), satellite instruments detect an abundance of particulate inorganic carbon (PIC) in waters at high latitudes. The PIC is often due to calcium carbonate, which makes up the plate-like shells of microscopic plankton known as coccolithophores. The calcium carbonate gives the water a chalky aquamarine hue.