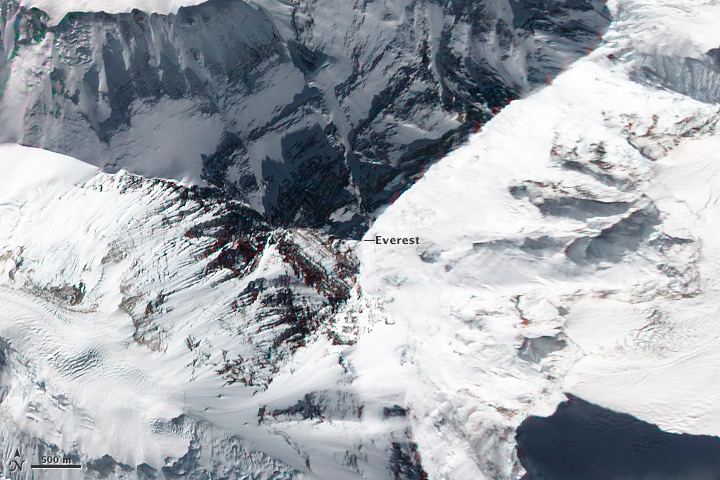 Fourteen mountain peaks on Earth stand taller than 8,000 meters (26,247 feet). The tallest of these “eight-thousanders” is Mount Everest, the standard to which all other mountains are compared. The Nepalese name for the mountain is Sagarmatha: “mother of the universe.”

Everest’s geological story began 40 million years ago when the Indian subcontinent began a slow-motion collision with Asia. The edges of two continents jammed together and pushed up the massive ridges that make up the Himalayas today. Pulitzer-winning journalist John McPhee summed up the wonder of the mountain’s history when he wrote Annals of the Former World: “The summit of Mount Everest is marine limestone. This one fact is a treatise in itself on the movements of the surface of the Earth. If by some fiat, I had to restrict all this writing to one sentence; this is the one I would choose.”

In other words, when climbers reach the top of Mount Everest, they are not standing on hard igneous rock produced by volcanoes. Rather, they are perched on softer sedimentary rock formed by the skeletons of creatures that lived in a warm ocean off the northern coast of India tens of millions of years ago.

Meanwhile, glaciers have chiseled Mount Everest’s summit into a huge, triangular pyramid, defined by three faces and three ridges that extend to the northeast, southeast, and northwest. The southeastern ridge is the most widely used climbing route. It is the one that Edmund Hillary and Tenzing Norgay followed in May 1953 when they became the first climbers to reach the summit and return safely.

Climbers who follow this route begin by trekking past Khumbu glacier and through the Khumbu ice fall, an extremely dangerous area where ice tumbles off the mountain into a chaotic waterfall of ice towers and crevasses. Next, climbers reach a bowl-shaped valley—a cirque—called the Western Cwm (pronounced coom) and then the foot of the Lhotse Face, a 1,125-meter (3,691-foot) wall of ice. Climbing up the Lhotse face leads to the South Col, the low point in the ridge that connects Everest to Lhotse. It is from the South Col that most expeditions launch their final assault on the summit, following a route up the southeastern ridge.

Some climbers opt for the northern ridge, which is known for having harsher winds and colder temperatures. That is the path that British climbers George Mallory and Andrew Irvine used in 1924 during what may, in fact, have been the first ascent. Whether the pair made it to the summit remains a topic of controversy, but what is known for certain is that the men were spotted pushing toward the peak just before the arrival of a storm. Mallory’s corpse was discovered near the northeast ridge at 8,160 meters (26,772 feet) by an American climber in 1999, but it still isn’t clear whether he reached the summit.

Despite its reputation as an extremely dangerous mountain, commercial guiding has done much to tame Everest in the last few decades. As of March 2012, there had been 5,656 successful ascents of Everest, while 223 people had died—a fatality rate of 4 percent.

At 6:30 a.m. on May 28, 1953, Edmund Hillary and Tenzing Norgay set out from a camp high above the South Col on the Southwest Face of Mount Everest and began the ascent for which both would become famous. Fighting through snow, winding along an exposed ridgeline with drops of over 1,000 meters (3,300 feet) on either side, scrambling up steep, rocky steps, and finally climbing a sloping snowfield, the pair reached the summit at 11:30 a.m. It was the first known climb of the world’s tallest mountain.