Lighting the Paths Across the U.S. 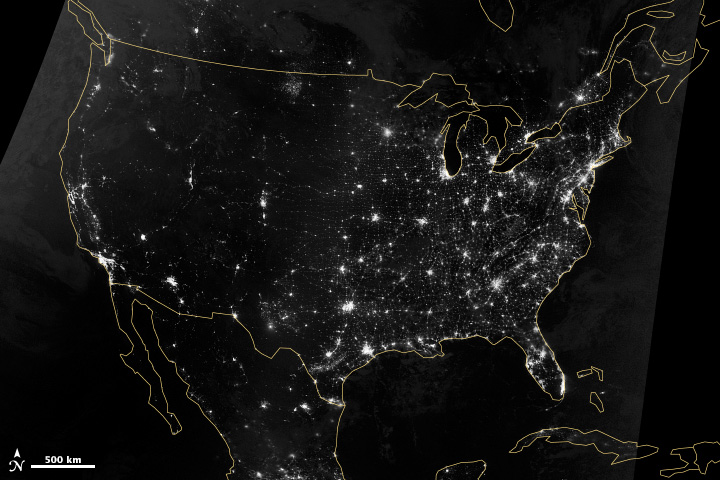 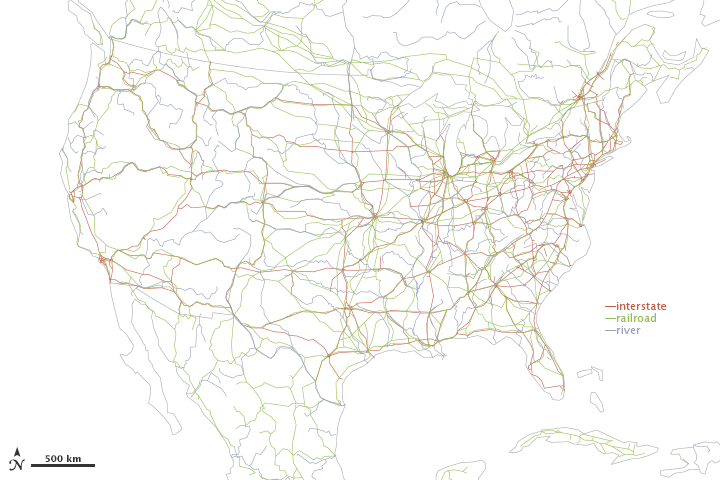 Thanksgiving is a time for family, for feasting, and for gratitude in the United States. It is also a time when the nation’s transportation network is clogged with travelers. According to the American Automobile Association, an estimated 43.4 million Americans will travel 50 miles (80 kilometers) or more during Thanksgiving week, with the average round trip being 600 miles (1,000 kilometers). More than 90 percent of them will use cars or trucks, while the rest will ride planes or trains.

The United States has more roads—4.1 million miles (6.6 million kilometers)—than any other nation in the world, and roughly 40 percent more than second-ranked India. About 47,000 of those U.S. miles are part of the Interstate Highway System, established by President Dwight Eisenhower in the 1950s. The country also has 127,000 miles (204,000 kilometers) of railroad tracks and about 25,000 miles (40,000 kilometers) of navigable rivers and canals (not including the Great Lakes).

The imprint of that transportation web becomes easier to see at night. The Visible Infrared Imaging Radiometer Suite (VIIRS) on the Suomi NPP satellite acquired two nighttime images early on October 1, 2013, for this natural-light, mosaic view (top) of the continental United States. The VIIRS instrument uses a “day-night band” of wavelengths that is sensitive to low light levels and manmade light sources. The images were collected just three days before the new moon, so reflected light from space and the atmosphere was relatively low. It was also a rare night when most of the nation was cloud-free. (See this 2012 image for a composite, artist-enhanced view of all of the U.S. night lights.)

The lower map traces the path of the major interstate highways, railroads, and rivers of the United States. If you turn on the image comparison tool, you will quickly see how the cities and settlements align with the transportation corridors. In the early days of the republic, post roads and toll roads for horse-drawn carts and carriages were built to connect eastern cities like Boston, New York, Baltimore, and Philadelphia, though relatively few travelers made the long, unlit journeys. Railroads became the dominant transportation for people and cargo in the middle of the 19th century, establishing longer links across the nation and waypoints across the Midwest, the Great Plains, and the Rockies. If you could've taken a satellite image in those eras, there probably would've been dim pearls of light strung together by unseen strands of steel tracks and cobbled roads.

Eventually cars and trucks became the dominant form of transportation. Drivers then needed roads, as well as lighting to keep them safely on those roads. As the nation grew up in the 20th century, the development of new cities and suburbs often conformed to the path of the interstate highways, adding light along the paths between the cities. More than 86 percent of modern passenger transportation in the United States is by cars or trucks; cargo is predominantly carried by truck (60 percent), though railroads still carry a substantial portion when measured by weight. The transportation sector accounts for two thirds of U.S. oil consumption and one out of every nine jobs.

Across the years, the length of navigable rivers has been a constant, as is their relative lack of light. Even today the only light seems to be the occasional port cities along the riverbanks and the light of the ships themselves.

Satellite views of night lights help reveal the strings of roads, rails, and rivers than connect the citizens of the United States.

These images capture sites of historic and religious significance around the world.