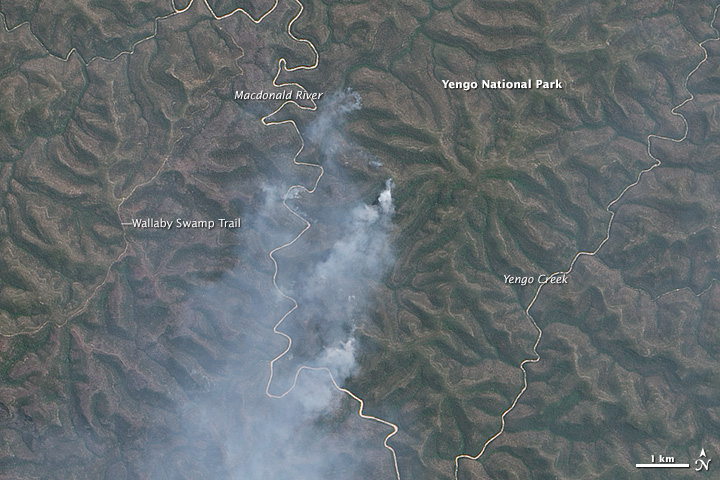 While the bushfire crisis that gripped New South Wales in October 2013 has eased, some fires continue to burn in the Blue Mountains. On November 5, 2013, the Operational Land Imager on Landsat 8 acquired this natural-color image of the Howes Swamp fire burning in in Yengo National Park, northwest of Sydney.

As of November 7, the fire had burned more than 35,000 hectares (86,000 acres), according to an update from the New South Wales Rural Fire Service. The fire did not pose a threat to property, but firefighters were battling the blaze with aircraft as well as from the ground.

In early September, the Bushfire Cooperative Research Center released a report noting that large swaths of New South Wales faced an unusually high risk of fire during the 2013–2014 bushfire season. Abundant rain over the past three summers has left extra grass and vegetation in many areas. Unusually high temperatures since July 2013 also dried out forests, priming them to burn. One of the fires that emerged in October destroyed more than 190 homes.