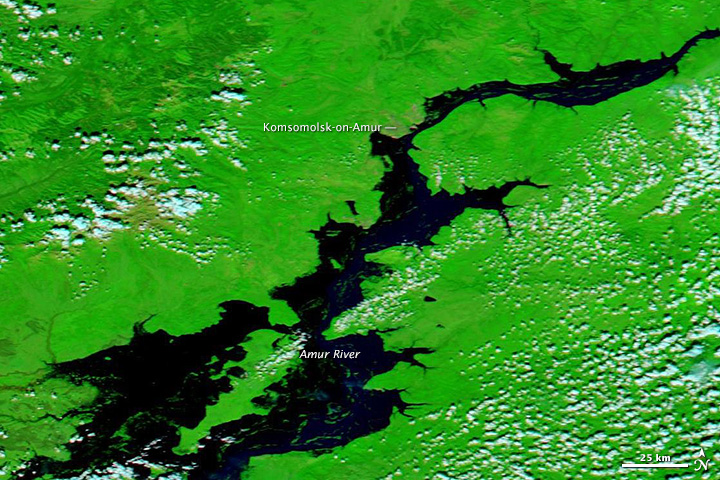 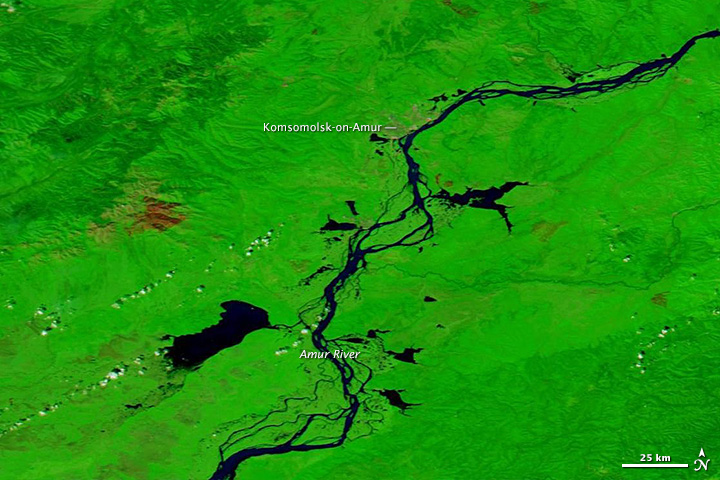 The extreme floods that have been threatening northeastern China and the Russian Far East are slowly moving north along the length of the Amur River. The bulge of flood water has now reached Komsomolsk-on-Amur, a Russian city of about 500,000 people. The flood overwhelmed a dam, and the resulting flood inundated 300 homes and put about 1,000 people at risk, according to local news reports. Flood waters on the river continue to rise, and an additional 36,000 people may have to be evacuated.

The Moderate Resolution Imaging Spectroradiometer (MODIS) on NASA’s Aqua satellite acquired the top false-color image of the swollen Amur River on September 8, 2013. The lower image, also from Aqua MODIS, shows the river on August 17, 2012, providing a view of normal water levels during the late summer.

The false-color images were made with short-wave and near-infrared light. Water is black; plant-covered land is green; clouds are pale blue and white; and burned land is red. The city of Komsomolsk-on-Amur is pale brown. The winding river channels and sponge-like appearance of the land around the river in the 2012 image indicates the presence of wetlands.

As of September 7, 2013, the Amur River had reached 8.71 meters (28.57 feet) in Komsomolsk-on-Amur and was rising 13-15 centimeters per day. The flood peaked downstream in Khabarovsk at a record 8.1 meters earlier in the week. The previous record high had been 6.42 meters (21.06 feet). To date, 2,300 buildings have been flooded in Russia. The floods farther downstream in China are affecting more than 5 million people.