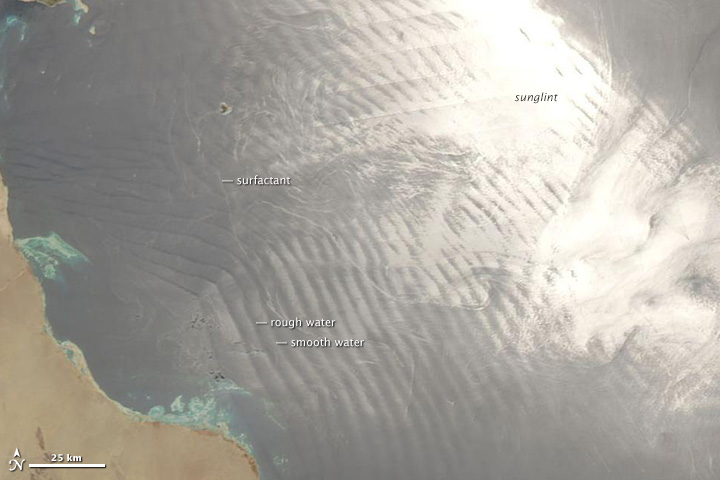 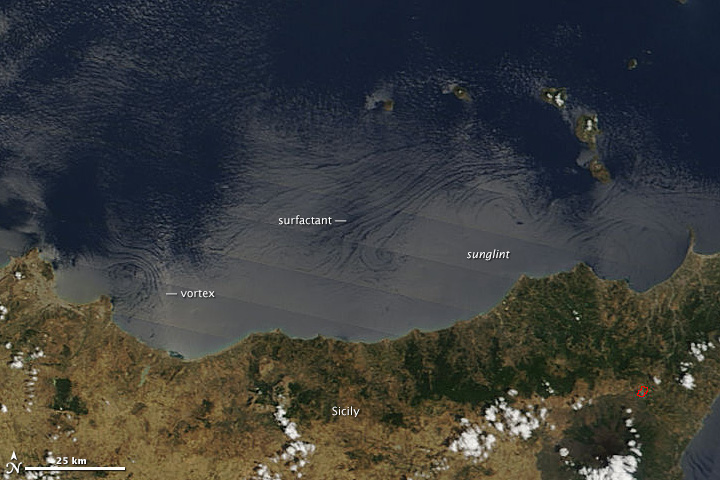 When astronauts first left this planet and looked back from space, they discovered that the ocean surface was covered with unsuspected and unexplained patterns. These patterns were so intriguing that NASA eventually sent a trained oceanographer, Paul Scully-Power, into orbit onboard the Challenger to document the features in October 1984. He noted: “On orbit, it soon became clear that by far the most information on ocean dynamics and features can be obtained from the sun glitter.”

His observation holds true for satellite observations today. These two images illustrate how sunglint exposes details of the ocean surface. The top image shows the Red Sea on July 29, 2013, as observed by the Moderate Resolution Imaging Spectroradiometer (MODIS) on NASA’s Aqua satellite. The lower image shows the Mediterranean Sea off Sicily’s north shore, as seen by the MODIS sensor on NASA’s Terra satellite on July 19, 2013.

In both cases, reflected sunlight turns the ocean into a silvery mirror. The even, diagonal lines are artifacts of the way the MODIS sensors acquire images. In the top image, long waves run parallel to the shore in alternating stripes of light and dark. These are the result of atmospheric gravity waves—waves that form in the atmosphere as a result of sinking and rising air. The troughs of the waves are ruffling the water’s surface, creating lines of rough water. The waves scatter light, creating lines of darkness where less light is reaching the sensor in space.

The top image shows fine, white swirling lines made by some kind of film, such as oil or natural biological secretions. The film (or surfactant) dampens waves, so the water is smooth. The smooth water is reflecting light towards the satellite.

Sometimes, however, the opposite occurs: the thin film looks dark, as in the lower image. The film takes the shape of currents, trailing straight lines and swirling vortices in the wake of Sicily and the small islands to its north. In this case, the smooth water is black. What causes the difference? The water is on the edge of the sunglint region. The smooth water is still reflecting more light, but this time, the light is being reflected away from the satellite, creating dark patches.

All of the features revealed in the sunglint provide some insight into how the top layer of the ocean works. Gravity waves show an otherwise invisible interaction between the ocean and atmosphere. The surfactants reveal surface currents that stir and distribute nutrients, pollutants, larvae, and plankton in near the ocean surface.

Sunglint shows textures and patterns on the surface of the ocean that would otherwise be invisible.