Fires and Farms in Indonesia 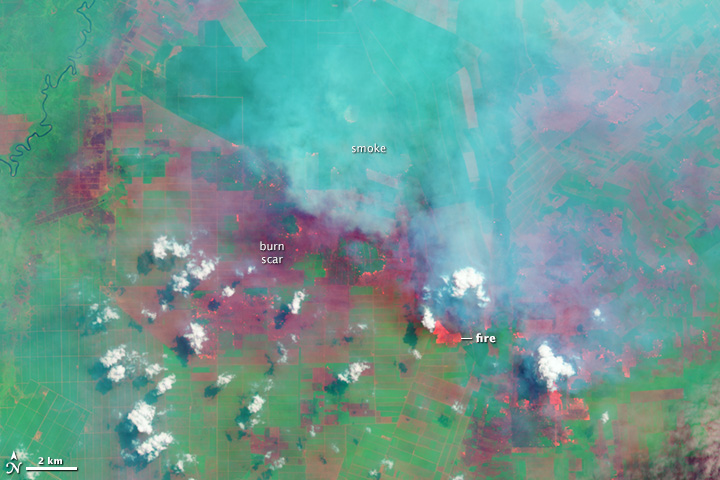 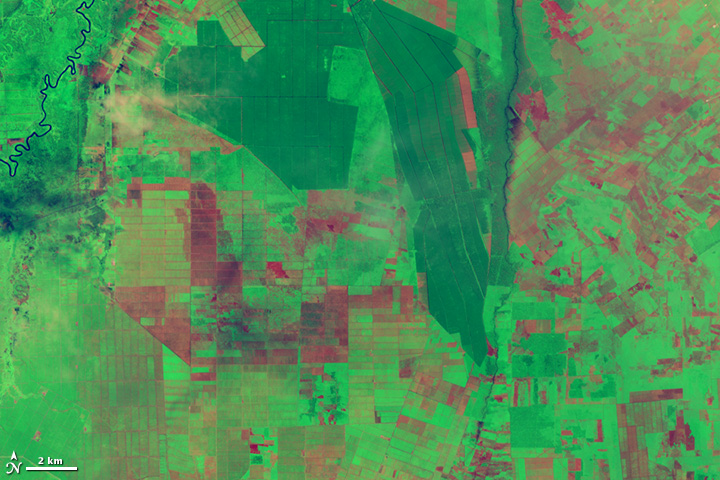 In late June 2013, smoke billowed from thousands of fires on the Indonesian island of Sumatra and blew across the Strait of Malacca to Malaysia and Singapore. Haze-darkened skies have become all too normal during the tropical dry season in this region; but this year, air quality degraded more than ever before in Singapore. On June 21, the nation’s air quality index reached a record 400. The maximum level for good health is 100.

A close look at Riau—the Sumatran province closest to Singapore and site of most of the fires—reveals a likely cause of the fires: land use. The Operational Land Imager on the Landsat 8 satellite acquired the top image on June 25, 2013, at the height of the burning episode. The image was made with a combination of visible (green) and infrared light so that fires and freshly burned land would stand out. The blue smudge across the scene is smoke, while higher clouds are white. Fires glow orange, and newly burned land is dark red. Bare soil or older burn scars are a lighter shade of red. Many fires burn within well-defined, rectangular fields, showing that they were probably set to clear the land for farming.

The lower image, taken by Landsat 8 on May 24, 2013, shows the same area before the burning started. The grids and lines suggest that the area is almost entirely devoted to agriculture. According to land-use maps from the Indonesian government, the dark green fields are mature forest, likely palm oil and timber plantations. Paler green areas are either less-mature trees or other crops, and red fields are bare soil or burned land. The contrast between the two images shows that both mature forest and other types of land cover burned in June.

The trend of burning for agriculture holds true throughout Sumatra. Between June 1 and June 25, the Moderate Resolution Imaging Spectroradiometer (MODIS) sensors on NASA’s Aqua and Terra satellites counted thousands of fires in Sumatra. Fifty-two percent of those fires burned in areas zoned for palm oil or pulpwood plantations. Two-thirds of the fires burned on fertile peat land, where the dense, organic soil burns for days to weeks and generates more smoke, haze, pollutants, and greenhouse gases than other types of fire. Unusual wind patterns pushed the smoke toward Singapore and Malaysia, creating an air quality disaster.

In an effort to curb such burning, the Indonesian government declared a temporary moratorium on new permits for land development in primary forest and peat land between 2011 and 2013. The moratorium has had little impact, according to the U.S. Department of Agriculture’s Foreign Agricultural Service. Palm oil plantations alone have increased by an average 630,000 hectares per year between 2011 and 2013, up from a growth rate of 500,000 hectares per year in the previous decade. This growth can continue for up to a decade at this rate without breaching the moratorium because palm oil producers already hold six to seven million hectares of undeveloped land.

Palm oil production is highly profitable, and the commodity is an important export for Indonesia, the world’s largest producer. (Crop analysts forecast a record palm oil harvest of 31 million tons this year.) When converting forest to a palm oil plantation, growers harvest the timber, and then burn the remaining brush and trees before planting new seedlings. This means that as palm oil production expands, the annual fires and associated air quality issues are likely to continue.

A common land management practice in Indonesia caused air quality quibbles with its neighbors in 2013.