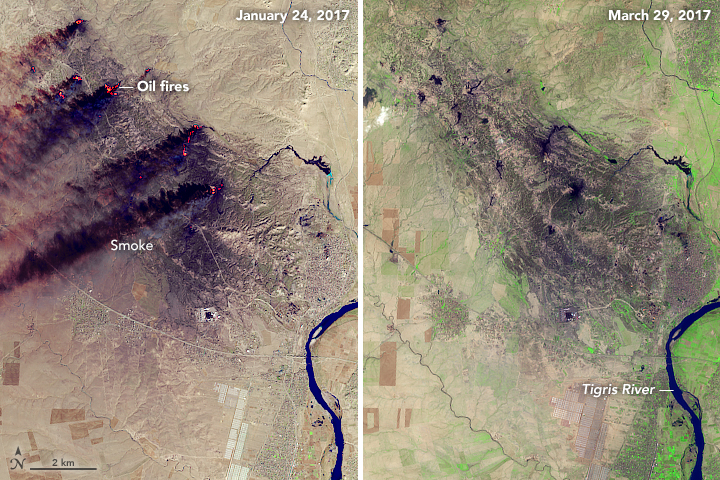 Several oil fires that have burned in northern Iraq for months have been extinguished. NASA satellites first detected fires at one or two wells near the towns of Qayyarah and Shargat in May 2016. Small fires continued to spring up intermittently throughout June. In July 2016, the number and volume of fires increased dramatically.

From July 2016 onward, satellites returned daily images showing clouds of thick, black smoke streaming from the Qayyarah oil field. For a period in October, black smoke from oil fires even mixed with a noxious white cloud of sulfur dioxide from a separate blaze at a factory.

By April 2017, Iraqi firefighters had put out the fires. NASA satellites last detected heat and smoke from the oil field on March 27, 2017. Iraq’s oil ministry made a formal announcement about the end of the fires on April 4, 2017. Of the 50 oil wells in the area, militants lit 18 of them on fire, according to Rudaw.

The Operational Land Imager (OLI) on Landsat 8 captured these false-color images on January 24, 2017, and March 29, 2017. The images combine shortwave-infrared, near-infrared, and green light (OLI bands 6-5-3) to show active fires (bright red) and smoke (black). The vegetation (green) in the March 29 image is the product of spring plant growth.