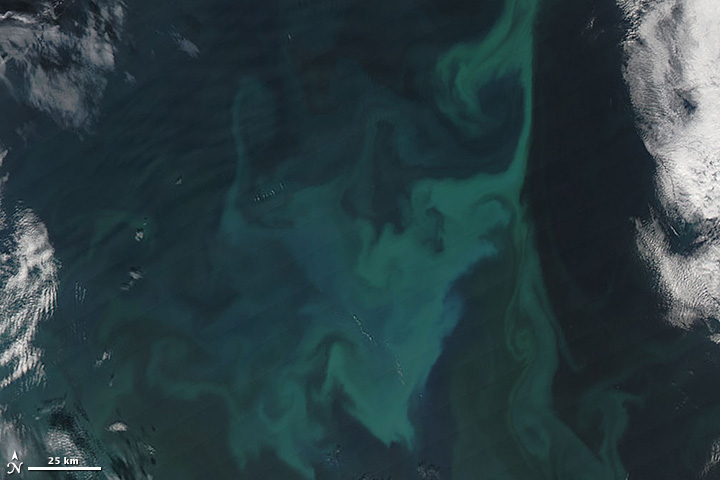 The waters off Iceland rank among the world’s most productive fisheries. The reason for the abundance is an ample supply of phytoplankton, the base of the marine food chain. Like any plant, microscopic phytoplankton need sunlight and nutrients to survive. Iceland’s coastal waters offer both during the long days of summer.

The Moderate Resolution Imaging Spectroradiometer (MODIS) on NASA’s Aqua satellite acquired this image of a large phytoplankton bloom on July 6, 2013. The range of colors from milky blue to green suggests that a range of different species make up this bloom, most likely including diatoms and perhaps chalky white coccolithophores, says Sergio Signorini, an ocean scientist at NASA Goddard Space Flight Center.

Floating in the water, phytoplankton act like tracers, revealing the course of mixing currents and the swirling eddies where they clash. A branch of the North Atlantic Current (the Gulf Stream) flows north bringing warm Atlantic water to mix with cold Arctic currents circling in from the east.

The high value of Iceland’s fisheries ensures that these are well-studied waters. Comparisons of phytoplankton growth from the 1950s to the present shows that the waters northeast of Iceland aren’t generally as productive as those to the southwest. Some of the plankton in this bloom may have formed to the south and drifted north on the currents, says Signorini. MODIS images from July 6 show an extensive bloom extending from the North Sea near Denmark to this location northeast of Iceland.